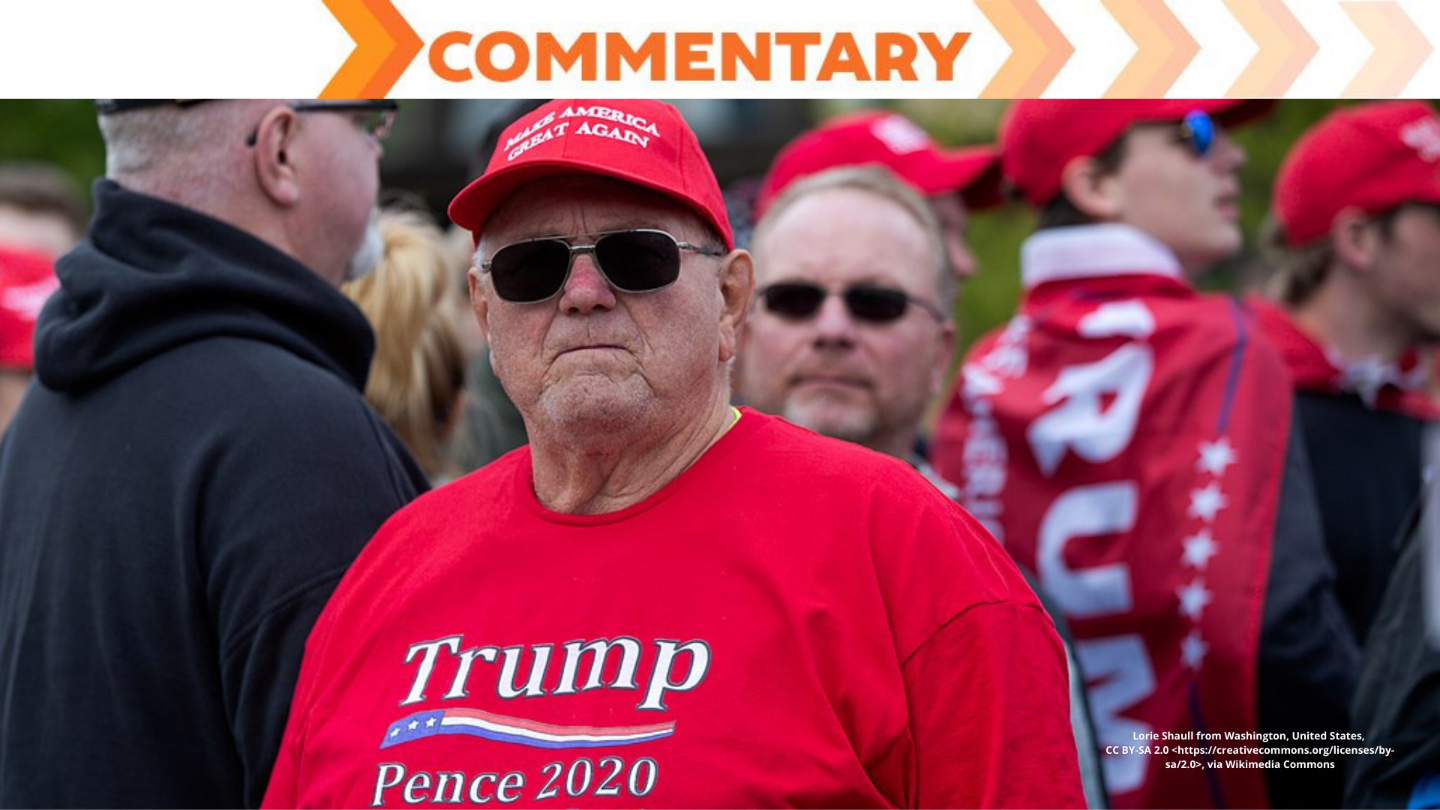 Why Did So Many White People Vote for "Burn It Down" Trumpism?

At last count, more than 73 million people voted to keep Donald Trump in the White House. Of these, just over 58 million, or about 81%, were white, according to a CNN exit poll. To preserve and protect democracy, we all need to understand why so many white people favored Trump. What sustains Trumpism?

Of course, most of the KKK and the Proud Boys will never change. The Tea Party is another reliably pro-Trump faction, many of them well-off and racially motivated. And most white evangelicals are rock-solid Trump supporters, many of them racist; they represent only 15% of the U.S. population but cast 44% of Trump’s ballots.

Nevertheless, a significant portion of those 72 million Trumpers are not associated with white supremacy or evangelicalism or the Tea Party; they voted against “the system,” to give it the finger, or symbolically burn it down (to quote both Donald Trump and Steve Bannon), because they and their families have not fared well during the past 40 years. They are “the laborers, the line workers, the waitresses, the janitors, the shovel holders and anyone else suffering from holding up this country… people who feel unseen, and in desperation they reach out to anyone who even appears to care about them.”

This story starts with declining public health — the rising incidence of chronic pain and early death in the U.S. population. Given advances in labor-saving technologies and pain treatments, researchers expect pain to be constantly decreasing in the U.S. However, when Princeton economist Anne Case looked at recent data, she found the opposite. Today 100 million people in the U.S. — nearly one-third of the population — report they’re suffering from chronic pain, meaning they’ve been in pain most days for the past three months. People with less education report more pain, probably for three reasons: in general, their work is more physically taxing, their lives tend to be harder than the lives of people with a college degree, but also because physical pain can reflect psychological and spiritual distress.

When Case and her husband, Angus Deaton, also a Princeton economist, looked at the U.S. county by county they found increases in chronic pain correlated strongly with votes for Trump in 2016.

Case and Deaton also found that pain correlated strongly with rising rates of early death among non-Hispanic white people in their prime years (45 to 54); paradoxically, the same was not true of Black and Hispanic people (using Case and Deaton’s terminology). This was an astonishing discovery. For many decades, deaths in rich countries have been declining about 2% per year. Now suddenly the trend had reversed among U.S. white people in mid-life, but not in other rich countries and less so among Black and Hispanic people. Something truly unusual has been happening in the U.S.

Between 1999 and 2017 in the U.S., more than 600,000 “extra” deaths occurred among white people between ages 45 and 54. That’s 33,000 “extra” deaths each year for 18 years in a row — among people in their prime years. “Extra” deaths are deaths over and above those that are expected based on age and other characteristics of the population. These deaths went unnoticed until 2015 when Case and Deaton revealed them in a ground-breaking study, which then led to their 2017 monograph and then their 2020 book, Deaths of Despair.

What caused such enormous, unexpected loss of life? After 1980, Ronald Reagan’s ideology (“government is the problem”) led to the elimination of restrictions on corporations, creating the “winner take all” economy. Corporations began sluicing money upward to executives and shareholders while hiring low-wage workers overseas, eliminating good-paying, steady jobs for Americans.

Abandoned by their “hands off” government as their jobs disappeared, more people began abusing drugs and alcohol, and committing suicide. Meanwhile the Republicans’ drown-government-in-a-bathtub ideology led to steady cuts in public health funding. The stated purpose of public health is “to assure the conditions in which people can be healthy” but to succeed it has to be funded.

Deaths of despair are deaths triggered by joblessness and stagnant wages, which in turn corrode self-esteem, family structure and community life. Two of the mainstays of U.S. community life — churches and labor unions — are both in decline. Only about a third of white people still attend church regularly, and fewer than 11% of workers belong to a union, down from a high of 35% in 1954.

Some 98 million people — more than a third of all U.S. adults — were prescribed opioids in 2015. For many people, prescriptions led to addiction, which then led to illicit drugs such as heroin and Fentanyl. In 2016, nearly 29 million Americans ages twelve and over self-reported using illicit drugs in the previous month (including misused prescription drugs) and nearly a million (948,000) reported using heroin in the preceding twelve months. “Given that these are self-reports, from people participating in the National Survey on Drug Use and Health, the number is likely to be an underestimate,” Case and Deaton write.

Case and Deaton dug deeper into these statistics, concluding, “…the increase in pain among less-educated Americans can be traced back to the slow disintegration of their social and economic lives. And that the pain is, in turn, one of the links through which disintegration leads to suicide and addiction.”

After detailed analysis, Case and Deaton concluded that the underlying explanation for pain and despair is not poverty and not inequality. It is the proportion of the local population that is jobless. Analyzed separately, suicide, drug overdoses and alcohol-related liver disease each rise in lock step with joblessness.

The true rate of joblessness is not reported in government data; about 11% of the U.S. workforce is not employed but not reported as unemployed in official statistics because these 18 million people have stopped looking for work. Another 6 million are unemployed — jobless but looking for work. In The War on Normal People, former presidential candidate Andrew Yang writes, “What Americans who cannot find jobs find instead is despair. If you care about communities and our way of life, you care about people having jobs.”

In his review of Deaths of Despair, surgeon and public-health researcher Atul Gawande explains, for white men without a college education, wages have declined since 1979, and available work isn’t as stable, with hours more uncertain and job duration shorter.

“Among advanced economies, this deterioration in pay and job stability is unique to the United States,” Gawande writes. And: “In the past four decades, Americans without bachelor’s degrees — the majority of the working-age population — have found themselves ever less valued in our economy…. Émile Durkheim pointed out more than a century ago that despair and then suicide result when people’s material and social circumstances fall below their expectations.”

“Meanwhile, people whose life prospects have deteriorated respond, publicly, with anger (sometimes cynically inflamed) toward nonwhites and immigrants, whose prospects, though worse than their white counterparts’, may have improved compared with those of their forebears,” Gawande writes. But “the more widespread response is a sense of hopelessness and helplessness,” Case and Deaton tell us. Hopelessness and helplessness join with pain and anger, which are also widely felt. In 2019 an NBC/Wall Street Journal poll reported that 70 percent of Americans say they feel angry “because our political system seems to only be working for the insiders with money and power, like those on Wall Street or in Washington.” Trump promised (falsely) to take down those insiders and restore power to the people.

Gawande again: “When it comes to people whose lives aren’t going well, American culture is a harsh judge: if you can’t find enough work, if your wages are too low, if you can’t be counted on to support a family, if you don’t have a promising future, then there must be something wrong with you. When people discover that they can numb negative feelings with alcohol or drugs, only to find that addiction has made them even more powerless, it seems to confirm that they are to blame. We Americans are reluctant to acknowledge that our economy serves the educated classes and penalizes the rest. But that’s exactly the situation, and Deaths of Despair shows how the immiseration of the less educated has resulted in the loss of hundreds of thousands of lives, even as the economy has thrived and the stock market has soared.”

(1) Easy access to the means for suicide — opioids and guns;

(2) The U.S. has adopted automation and globalization enthusiastically with few restrictions;

(3) Displaced workers get little protection or support; the so-called “safety net” is weak and short-lived and comes with social stigma;

(4) We’ve allowed capital to take a steadily larger share of profits compared to employees, causing wages to stagnate for 40 years. Case and Deaton write, “The declining labor share means that productivity growth in the economy no longer feeds one for one into growth in wages. Not only has productivity grown more slowly since the early 1970s, but wages have not kept up with the slower growth. Until 1979, productivity growth and worker compensation grew together, but from 1979 to 2018, productivity grew by 70 percent and hourly pay by only 12 percent.”

When government enacts effective programs to deal with these five realities, it will eliminate much of the appeal of middle-finger Trumpism. As Nathaniel Manderson puts it, “The true path to defeating Trumpism forever lies within the blue-collar, working-class poor of this country.” Fixing these problems (starting with a program to “Electrify America!”) would make life in the U.S. better for everyone.