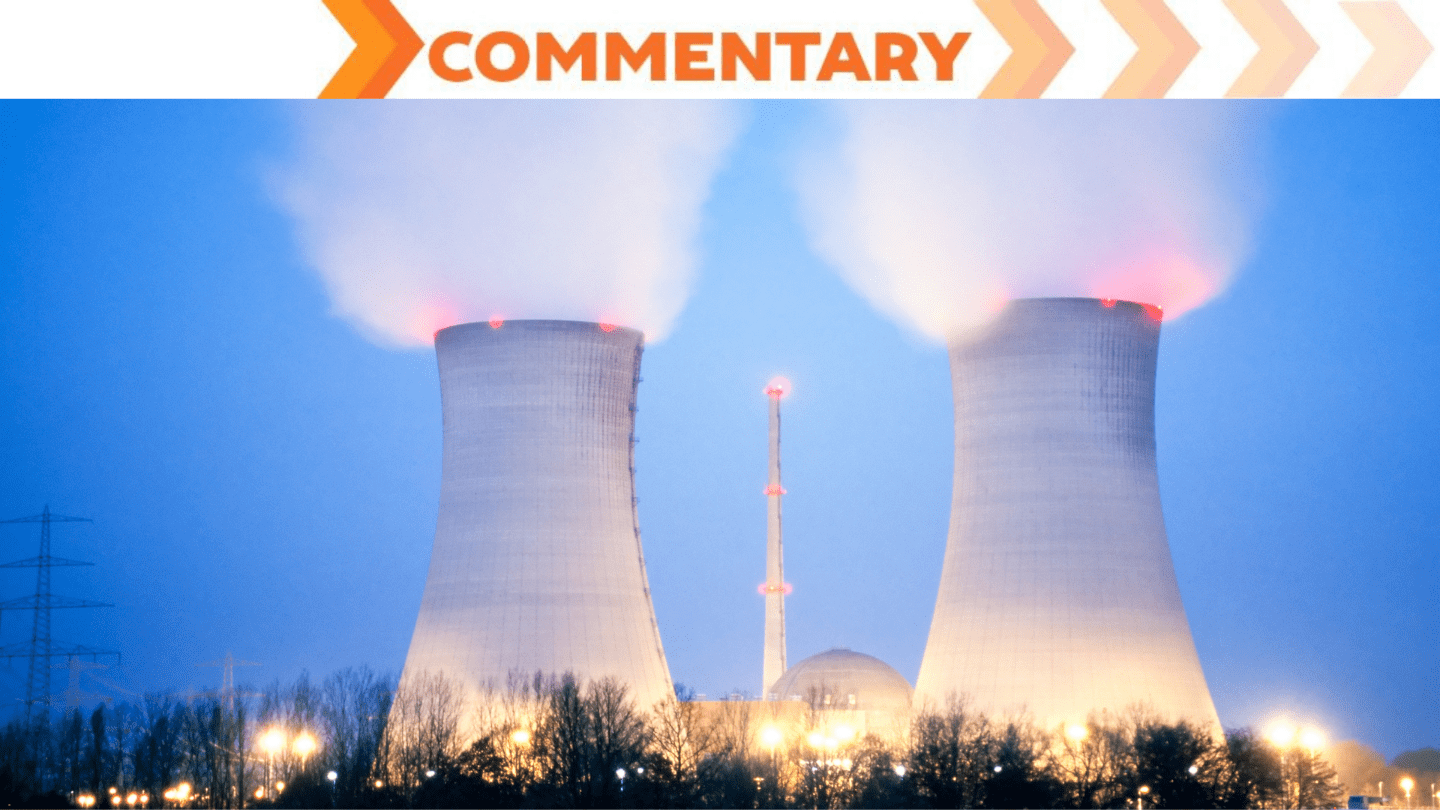 Trump Admin to Give $1.4 Billion to Try to Revive the Nuclear Power Industry

The U.S. Nuclear Regulatory Commission (NRC) in August approved the design of a new kind of nuclear power reactor invented by NuScale Power, a startup company with offices in Corvallis and Portland, Oregon.

The new design is called an SMR (small modular reactor). NRC approval of the SMR design does not mean construction can begin; nevertheless, it is a significant step toward NuScale’s goal: to deploy up to 1,682 small (60-megawatt) reactors across the U.S. and beyond starting in 2023, essentially reviving the moribund nuclear power industry.

Successful deployment of 1,682 60-megawatt SMRs in the U.S. would more than double domestic nuclear power capacity, which currently stands at about 98,000 megawatts. Globally, nuclear power is in decline; in 1996, it produced 17.5 percent of global electricity, but today only 10 percent. In the U.S., only one new nuclear plant has started operating since 1996. The only nuclear plant currently under construction has suffered major delays and cost overruns.

Compared to typical old-style nuclear power plants, the approved NuScale pressurized-water SMR is modest in size, measuring 65 feet high and 9 feet in diameter, producing 50 megawatts of electricity. It is “modular,” meaning it can be built in a factory and shipped to its final destination. According to Science magazine, each of NuScale’s SMRs holds one-eighth as much radioactive fuel as an old-style 1000-megawatt nuclear plant. The NRC is expecting NuScale to apply for approval of a revised design in 2022, increasing the power of each SMR to 60 megawatts.

The NuScale reactor has been developed almost entirely by governments. The original design was invented in 1999 at a public university, Oregon State, in Corvallis. NuScale Power was incorporated in 2007 to privatize and commercialize the public invention. In 2011, NuScale was purchased by Fluor Corporation. In 2013, the U.S. Department of Energy gave NuScale $226 million to refine its SMR plans, and in 2018 another $40 million.

In October 2020, the Trump administration announced it was giving NuScale an eye-popping $1.4 billion to build the first 12 SMRs, which would be clustered together on federal property at the Idaho National Laboratory (INL) near Idaho Falls. Construction on federal property reduces the likelihood of citizen protests, which might otherwise erupt.

NuScale’s INL energy would be purchased by the U.S. Department of Energy and by municipal governments in Utah, Idaho, Nevada, New Mexico and California participating in UAMPS (Utah Associated Municipal Power Systems). UAMPS is a political subdivision of the state of Utah.

The federal government has been aggressively promoting nuclear power since 1953 when President Eisenhower gave his “Atoms for Peace” speech to the United Nations General Assembly, saying “the United States pledges… its determination to help solve the fearful atomic dilemma — to devote its entire heart and mind to find the way by which the miraculous inventiveness of man shall not be dedicated to his death, but consecrated to his life.” In 1953, many in the U.S. were feeling remorseful for killing an estimated 225,000 civilians when atomic bombs incinerated the Japanese cities of Hiroshima and Nagasaki in August 1945. Since 1953, aiming to show that splitting the atom was a boon to humankind and not a horrible mistake, the U.S. has invested about $200 billion to promote nuclear-generated electricity. As the Union of Concerned Scientists has said, the Department of Energy “has traditionally been an unapologetic nuclear power cheerleader.”

After 63 years of commercial nuclear power operation in the U.S., no one has yet solved the problem of radioactive waste, which is accumulating at numerous locations around the country. The project to bury high-level waste at Yucca Mountain in Nevada has been abandoned, at least for now. The most-recent plan is to bury high-level waste in a salt mine near Carlsbad, New Mexico, at the existing Waste Isolation Pilot Plant (WIPP). However, the WIPP site has been beset by serious problems. WIPP opened in 1999, intended to sequester radioactive waste for 10,000 years; however, after just 15 years of operation, deadly plutonium waste escaped, traveling 2,150 feet through the underground ventilation system to the surface, contaminating 17 workers and releasing plutonium into the desert air near Carlsbad.

If it is true that each of NuScale’s 60-megawatt SMR would contain one-eighth as much radioactive fuel as a 1000-megawatt power plant, then SMRs would create more radioactive waste per unit of electricity than traditional nuclear power plants, thus making the unsolved waste problem even larger and more urgent.

According to SMR proponents, NuScale’s approved reactor design would be “inherently safe” — so safe that the traditional 10-mile safety zone around each reactor could be eliminated, reducing siting costs. Furthermore, the heavy outer containment vessel now standard on nuclear plants, needed to contain deadly radioactivity in case of a catastrophic accident, will be reduced substantially for SMRs, further reducing costs, proponents say.

Several important technical organizations dispute the claim that NuScale SMRs can be operated safely and still provide electricity at a price competitive with renewables (solar, wind, and hydro power). Safety costs money, they say, and there’s no way around that equation. The Union of Concerned Scientists (UCS) and Oregon Physicians for Social Responsibility (OPSR) have both issued reports and statements critical of SMRs in general and of the NuScale SMR in particular. The Institute for Energy and Environmental Research and Physicians for Social Responsibility issued an early study of SMRs in 2010 that posed technical questions still not answered.

The author of the OPSR study of NuScale’s UAMPS project, Dr. M.V. Ramana, Director of the Liu Institute for Global Issues at the University of British Columbia in Vancouver, Canada, said “I am sorry to say what lies ahead is risky and expensive if these [UAMPS] municipalities do not avail themselves of the off ramps and exit this project.”

The OPSR study presents a detailed indictment of Nuscale’s claims of low-cost energy production and safety. The study points out that cost estimates of the NuScale’s UAMPS project doubled from $3 billion in 2015 to $6.1 billion in 2020. It predicts further cost increases, based on the history of other first-time nuclear designs.

Now that the price of renewable power (solar, wind and hydro) is cheaper than coal, cheaper than traditional nuclear, and continually dropping, SMR vendors will feel continuous pressure to cut costs to compete against ever-cheaper renewables. For example, the first cluster of 12 NuScale reactors built in Idaho will be run by the same number of operators now managing 3-reactor clusters — a cost-cutting measure with clear safety implications. If something goes awry, operators of the UAMPS cluster will have great complexity to assess and react to. The more parts a machine has, the more can go wrong.

“The main problem with NuScale’s approach is that it violates the fundamental safety philosophy of ‘defense-in-depth,’” said Edwin S. Lyman, Director of Nuclear Power Safety, for UCS. “Nuclear reactors should have multiple independent layers of safety in case that something happens that was not expected to happen,” Lyman said.

Now a surprising new study has thrown a monkey wrench into all plans to expand nuclear power, including NuScale’s. The main selling-point of nuclear power today has been its claim of low carbon emissions, but the new study, from researchers in the U.K. and Germany, raises serious doubts about that claim.

The study examined the experience of 103 countries between 1990 and 2014 and concluded that countries adopting renewable energy have reduced their carbon emissions far more effectively than countries choosing nuclear power.

“If countries want to lower emissions as substantially, rapidly, and cost-effectively as possible, they should prioritize support for renewables, rather than nuclear power,” the study concluded. If this new study holds up under further scrutiny, it could pound the final nail into the coffin of nuclear power.