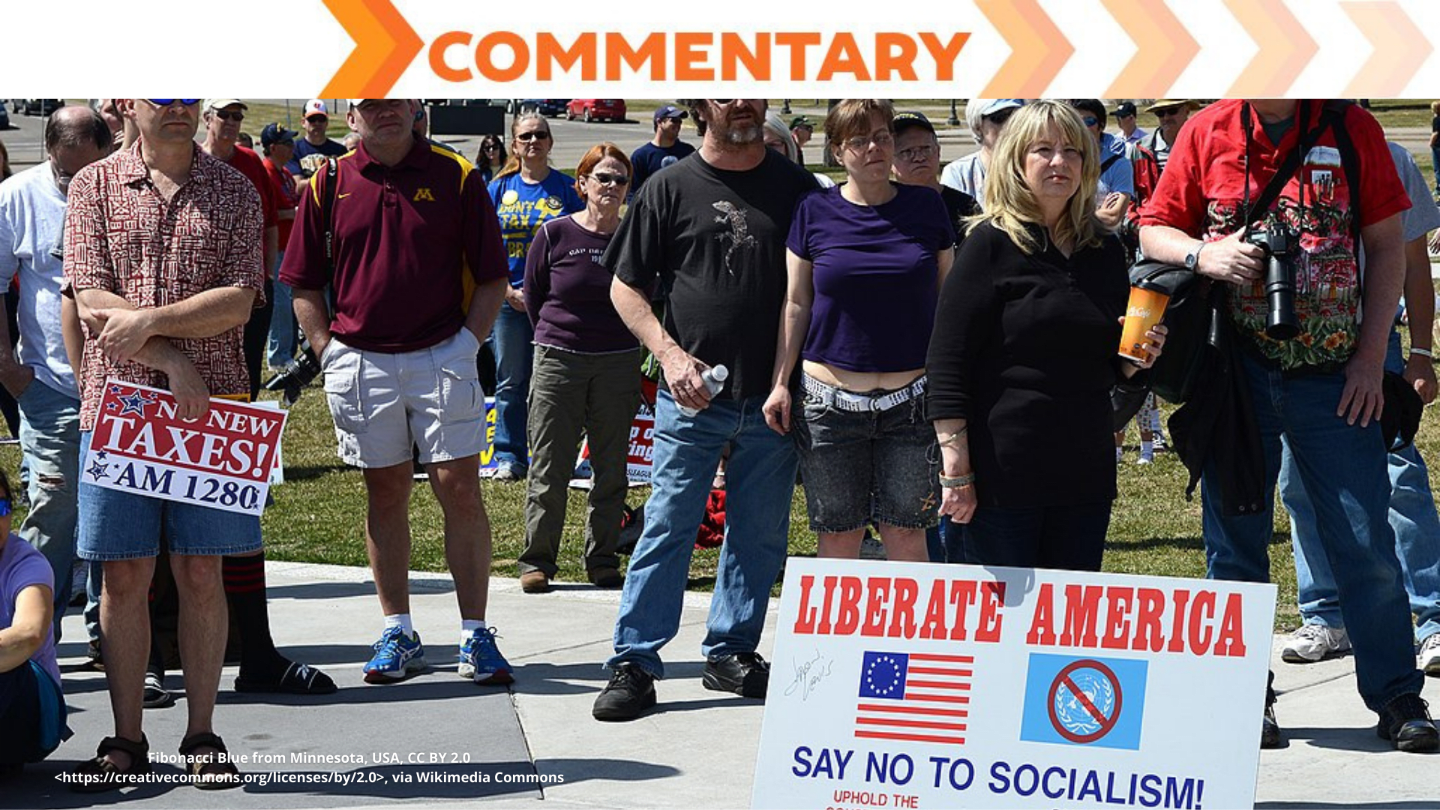 Republicans Are Trying to Scare You With the "Socialism" Boogeyman

President Trump says he’s running for a second term to defeat socialism, even though he doesn’t have a socialist opponent. Back when he was holding political rallies, Trump could get an ego-boosting roar from the crowd just by claiming, “This election will decide whether we save the American dream or whether we allow a socialist agenda to demolish our cherished destiny!”

The president has called Joe Biden “a Trojan horse for socialism.” At donaldjtrump.com, we read, “Donate now to stand with President Trump against radical socialism.”

Vice President Pence says electing Biden “would set America on a path of socialism and decline.” A spokesman for Trump’s campaign called the election “a binary decision between freedom and socialism.” Trump’s campaign website says the 2020 election is a stark choice: “American vs. Socialist,” as if the U.S. has no history with socialism.

For more than a century, socialism has been a convenient boogeyman, endlessly useful for scaring the U.S. populace into accepting whatever thin gruel conservatives and corporate elites have chosen to dish out.

Prior to the Russian revolution of 1917, it was hard to make socialism seem very scary. But by the 1920s and ’30s, calling someone a communist or a socialist carried real weight. Even some progressives and liberals allowed themselves to be cowed into silence by right-wing fear-mongers who conjured socialist sedition everywhere. Still, from the 1920s through the 1940s, Norman Thomas (a Princeton-educated Presbyterian minister) ran for public office on the Socialist Party ticket, including a bid for the presidency in every election from 1928 through 1948.

Socialism has two core meanings: first, control by the public, or by employees, of the means of production and distribution of goods; and, second, the use of public funds to provide benefits and services for the people (especially, disadvantaged people) including government health insurance (begun in Germany in 1883, ironically as an attempt to reduce the appeal of successful socialist politicians), old-age pensions (again, Germany, 1889), and unemployment compensation (Germany, 1927), for example. In the western world, this second meaning of socialism can be traced to the 19th century movement called Christian Socialism and even earlier to the words and deeds of a Jewish peasant rebelling against Roman colonialism, Jesus of Nazareth.

In times of capitalist crisis in the U.S., such as 2008, public funds have been used to bail out mismanaged automobile companies and banks (who sometimes used the public funds to give themselves big Christmas bonuses) — but that is not usually acknowledged as socialism. Nor is the $17 billion of federal dollars spent each year to support U.S. farms considered socialism. But both are socialism.

The truth is, the U.S. and all other countries employ a spectrum of social and economic practices, ranging from pure capitalism at one end to pure socialism at the other. Communist China enjoys many benefits from private enterprise. The U.S., England, France, Germany, and the Nordic nations — all wealthy capitalist counties — support many socialist institutions and practices.

In the U.S., examples of socialist institutions include

** more than 98,000 public schools and about 1,750 public colleges and universities plus numerous junior colleges, community colleges, and vocational schools in every state;

** the U.S. public transportation system (trains, trolleys, subways and buses, including school buses, plus the rails, roads and highways they run on, owned by, run by, paid for by, and/or heavily subsidized and regulated by governments;

** waste-collection systems across the U.S., which are mainly supported by public funds;

** plus 911 emergency services; satellite communication systems; the backbone infrastructure of the internet; management of the public airwaves for radio and TV;

** and, of course, the grand-daddy of all socialist organizations, the military.

If you are reluctant to admit that U.S. success is entirely dependent upon the socialist enterprises and practices just mentioned, you could choose to view all of those socialist organizations as business enterprises with the tax-paying public as joint owners. That way you can pretend to yourself that the U.S. has no socialist history because socialism destroys freedom. But ask yourself, who is more free — a person whose health insurance is provided by government and therefore continues whether she is employed or not? Or the person whose health insurance disappears when she gets laid off by a pandemic?

Today socialism is enjoying something of a renaissance as a skeptical generation asks probing questions about capitalism: “How can it be right that under capitalism some people have so much while others have so little? In particular, what do capitalists do to merit their stupendous wealth? That is to say, what is it that they do that entitles them, morally, to so large a slice of the economic pie?”

Such questions lead directly to a search for alternative systems: what could replace the worst elements of capitalism? The answer from the Democratic Socialists of America (DSA) is “more democracy.” Maria Svart, national director of DSA, says the problem with capitalism isn’t just that it’s unstable (as in 2008), or that it leaves “whole layers of society starving in the street.” The problem “is that it relies on a dictatorship of the rich,” she says. “The fundamental difference we expect from a socialist society is that we will all have a voice in the decisions that impact our lives,” Svart writes.

Want to know the best thing government has done to promote socialism? It has enabled by law many different forms of democratic ownership of business enterprises. Probably the most familiar form is the consumer-cooperative, like Recreational Equipment Inc. (better-known as REI) or the 6000 member-owned credit unions now serving 110 million people in the U.S., managing assets of $1.1 trillion. Credit unions are socialist banks, wholly owned by their members.

Member ownership is not the only form of democratic ownership. There’s state ownership (e.g., the Bank of North Dakota, owned and operated by the state since 1919), or community ownership (e.g., the Green Bay Packers, publicly owned since 1923). There are also producer co-ops, common in the dairy business. Or retailer-owned co-ops, like Ace Hardware and Best Western hotels. The United States Federation of Worker Cooperatives publishes an annual catalog of worker-owned co-ops functioning in every imaginable business sector all across the country. Worker-owned cooperatives are pure socialism and they’re nothing new in the USA.

Today most people in the U.S. experience democracy by paying taxes once a year, by voting every few years, and by not much else.

On the other hand, when workers own a business together, they have a real stake and a real voice in every part of the enterprise — its financing, its efficiency, the products or services it chooses to provide and the quality of those products, how its workers and their families are treated, its relationship to the community and to the natural world. Workers may manage the business themselves, or they may hire managers. But they still experience real democracy every day.

At a time when democracy is in serious danger from a Republican Party that has set out to subvert majority rule — and has, so far, largely succeeded in that effort — a powerful antidote is the worker-owned co-op. If you want to learn more, check out the Democracy Collaborative (and their vision of a post-Covid world), the New Economy Coalition, and the Democracy at Work Institute. They and many others are pointing the way toward a revived democracy, based on democratized ownership. Yes, socialism.

Next time some Republican tries to scare you into believing that socialism is the enemy of democracy or freedom — set them straight. Democratic control of the business enterprise, and generosity of spirit in helping people thrive, can only strengthen U.S. society and democratic governance. A better world is definitely possible and socialism (in both its meanings) will continue to be an integral and important part of it.