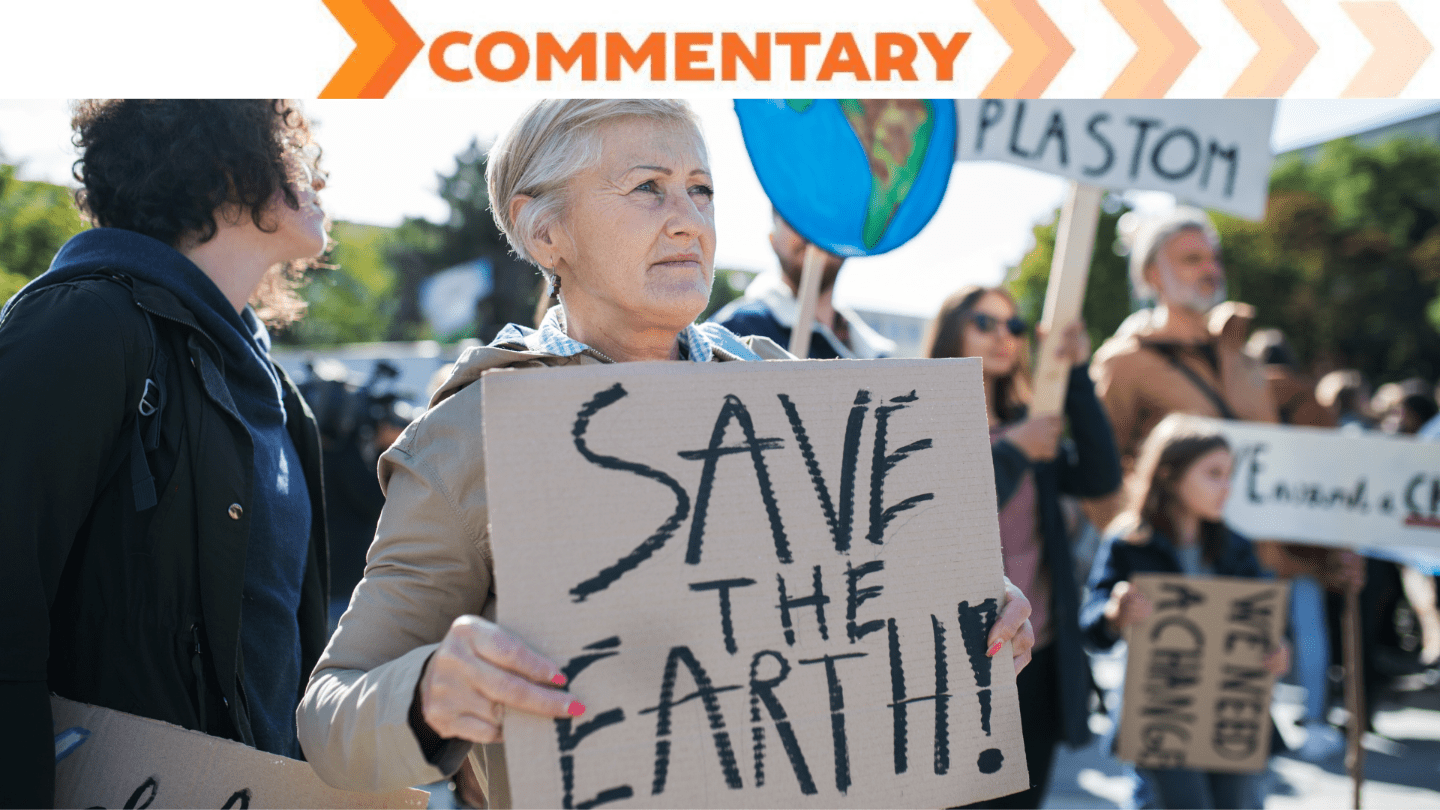 Announcing his presidential campaign in 2015, Donald Trump said “I will be the greatest jobs president that God ever created.” Evidently, God didn’t get the message. President Obama kick-started the jobs recovery from the Bush recession of 2008 and, during Trump’s first three years, new jobs followed the Obama trajectory. But then Trump’s mismanagement of the coronavirus pandemic sank the ship of state. The New York Times reported Sept. 5, 2020, “There are now almost five million fewer Americans with jobs than when Trump took office. In raw numbers, this is the worst jobs record of any modern president.”

Because of their disdain for science and verifiable information, Trump and his Republican followers not only bungled the pandemic, crashing the economy, but they also missed a historic opportunity to bring back prosperity by confronting the climate emergency and creating millions of new, well-paid jobs in the process.

A detailed new engineering study reveals that, if the U.S. converted all its fossil-fueled technologies to clean electric power in the next 15 years it would create 25 million peak new jobs over the next 3 to 5 years, eventually tapering off to 5 million permanent new jobs (over and above existing energy-sector jobs). There’s no surprise here: clean renewable energy simply requires more manufacturing, installation and maintenance compared to fossil fuels. These would be good, well-paid jobs in every zip code — jobs that could not be sent to China or Mexico. Most of the jobs would be in the trades — electrical, plumbing, and construction, many of them in parts of the country neglected during the past 40 years. All it would take is government leadership, organization and commitment — something government proudly provided in the past to defeat the Axis powers during World War II.

The new engineering study uses conservative assumptions. For example, it assumes using only technologies that are commercially available today; no technical or price breakthroughs are needed. The study also assumes no behavioral changes by the public. Further, the study assumes that no assets, like coal power plants, will be shut down before their original capital costs have been amortized (no “early retirement” of fossil-fuel assets). It also assumes no special efficiency measures besides the inherent efficiency of electricity vs. fossil fuels, and no carbon capture and storage (CCS). Lastly, it assumes a technology transition no faster than the U.S. has achieved in the past — the authors call it “the maximum feasible transition,” based on the history of U.S. industrial mobilization organized by government between 1940 and 1945.

The new study was conducted by Saul Griffith and Sam Calisch (both with advanced degrees from MIT) and Alex Laskey, co-founder of Rewiring America, a not-for-profit dedicated to converting the U.S. economy to electric power soon.

The study — in the form of a 30-page white paper not yet published in a peer-reviewed journal, plus a short book available free in PDF — began in 2018 when Griffith (a MacArthur “genius” awardee) worked under contract to the U.S. Department of Energy, creating a detailed database of every publicly-documented energy flow in the U.S. economy, from supply to demand.

The present study builds on that database using a “machines up” approach — examining every machine involved in every energy flow (lights, heat, and motors throughout every sector of the economy, including transportation, buildings, industry, and power generation). The study assumes that, at the end of every fossil-fueled machine’s normal lifetime, it will be replaced by an equivalent electric-powered machine. A gas stove gets replaced by an induction cooktop, a gasoline car by an electric car, a natural-gas furnace by a heat pump, an incandescent light bulb by an LED. In many buildings, a new breaker box (load center) would be required. The difference in cost between the old machines and the new ones installed, added up across the economy, is the cost of the transition. The number of jobs created by this expenditure is then calculated from reliable databases showing jobs created per million dollars invested.

Most households cannot afford to make a lump-sum investment in new technologies, so government would need to invent a low-interest loan program (“climate loans”) to make the transition possible. Griffith and his colleagues calculate the transition would cost the federal government $300 billion per year for 10 years, about 1.5% of gross domestic product (GDP), less than half of what the U.S. currently spends on the military.

The benefits would be enormous. First, of course, the world’s other major manufacturing nations (China, Germany, Japan and South Korea) would see the economic benefits of replicating our transition, so the world could avoid the worst of the climate emergency. In 2017 climate disruption was costing the U.S. about $240 billion each year, according to a study led by Sir Robert Watson, former chair of the International Panel on Climate Change (IPCC). With more fires, floods, record-breaking heat waves, and destructive wind storms, the annual cost of global heating is likely higher today, and rising.

Second, every U.S. household would save between $1000 and $2000 each year on its energy bill, the Griffith study shows, because electric power is simply more efficient than fossil-fueled sources, doing more work with less energy. After the transition, the U.S. economy as a whole would use 50 to 60 percent less energy than today. And then there are the jobs. In addition to the blue-collar jobs there would be many good white-collar jobs ­– education and training jobs, plus finance jobs to manage the large volume of financial transactions required during the transition.

Third, as a technology leader and early adopter, the U.S. could export both its technology and its clean energy.

The clean energy would come mainly from wind turbines and solar-panel arrays. (Some nuclear power would be “useful” but not necessary, the Griffith study says. Nuclear power presently produces about 20% of U.S. electricity, at double the cost per kilowatt-hour of solar or wind.) Some biofuels would be needed for long-distance aviation and certain industrial processes.

The U.S. currently has roughly 300 GW (gigawatts, or billions of watts) of carbon-free electricity-generating capacity. In the Griffith plan, this would grow 6-fold to about 1800 GW by 2035. Some of this would be generated on rooftops and used in the underlying buildings, requiring no access to the nation’s electrical transmission grid.

However, about 1000 GW of new electricity would have to be carried by the grid. This would more than triple the load on the grid, forcing a totally new grid-management philosophy to accommodate many new sources of supply and demand. Griffith calls it “grid neutrality,” analogous to “net neutrality.” At present, access to the nation’s electric grid is strictly limited; the new grid could be modeled on the internet where everyone can attach a device and start sending and receiving easily. Furthermore, the new grid would consist of many microgrids tied together, greatly increasing the reliability of energy-delivery to homes and businesses.

Renewable energy presents unique challenges, requiring many changes in building codes, laws, regulations and policies. For example, large wind turbines can produce flickering light and very-low-frequency sounds, which some humans find profoundly disturbing, in some cases arguably causing illness. Therefore, large turbines could only be placed where they would not disturb anyone. In addition, new transmission lines will be political poison in some locales; therefore, thoughtful, sensible and detailed early planning will be required everywhere. Only government has the capacity to organize such a large undertaking.

To provide another perspective, the earth receives 85,000 TW (terawatts, or trillions of watts) of sunlight each year; all human activity worldwide requires 19 terawatts, and the U.S. alone requires about 4 terawatts. Sun power is plentiful and free.

In late August, Democrats in the U.S. Senate released their own far-reaching plan for converting the economy to clean sources of power. They promise that, when they gain a majority, they will immediately begin spending $400 billion per year to convert the economy to 100% renewable energy by 2050, and they say 40% of those dollars will be intended to benefit communities of color and low income, deindustrialized and disadvantaged communities.

Similarly, Democratic presidential candidate Joe Biden has proposed to convert the U.S. electricity-generating system to renewable fuels by 2035 and the rest of the economy (transport, buildings, and industry) by 2050.

Both Democratic blueprints are huge steps forward, far better than the Republican plan, which is to double down on fossil fuels, fry the planet, and hope for the best. Still, both Democratic plans are somewhat less ambitious than the Griffith road map. Griffith calls for a World-War-II-scale mobilization, to “shoot for the moon,” to reach the decarbonization goal in 15 years, creating the needed sense of white-hot urgency. If the Democrats embraced Griffith’s more-aggressive plan, we could avert the worst of the climate emergency, revive the economy quickly with many millions of good new jobs, and save every family money, all at the same time. Why would anyone want to settle for less?