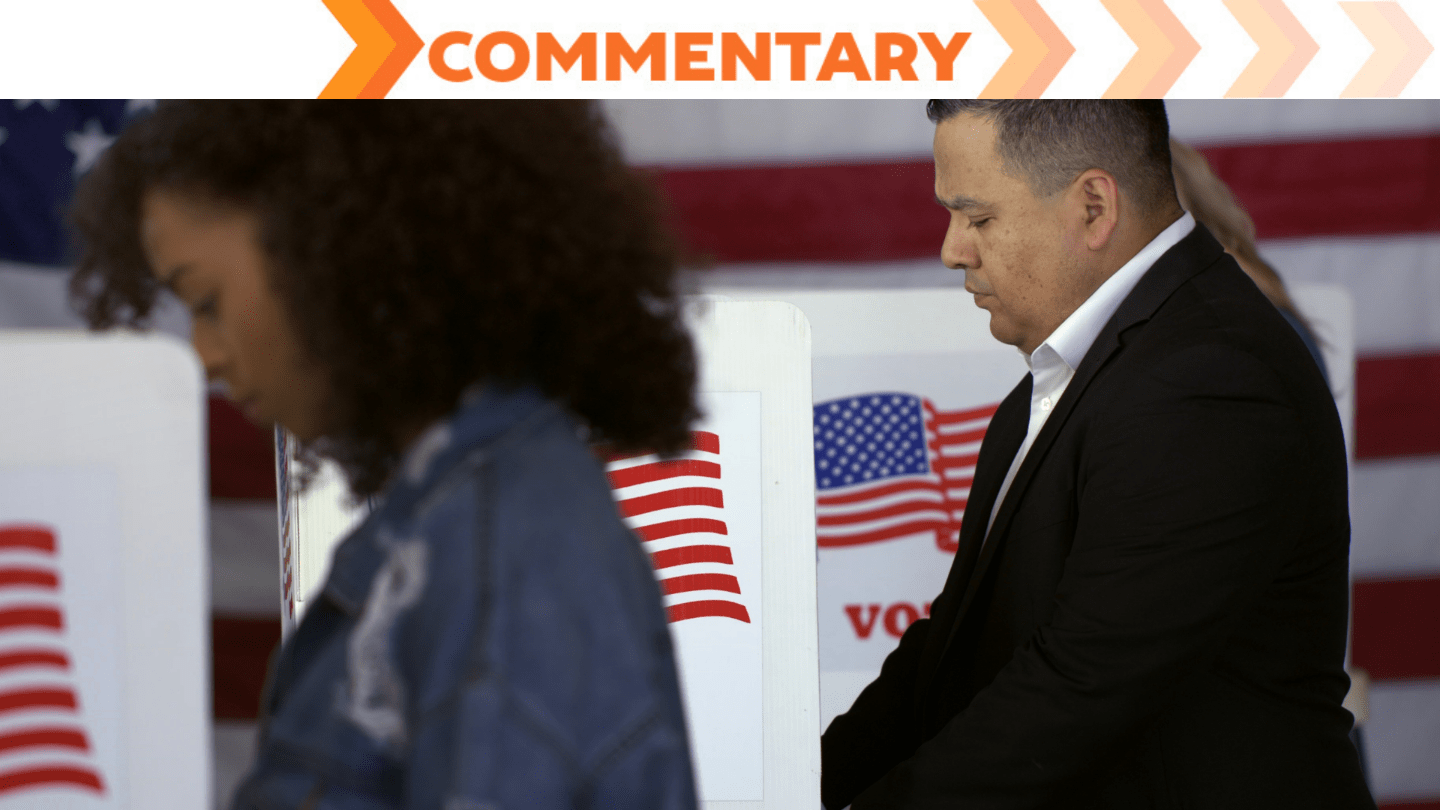 The election will be decided by how many people try to vote and how many votes get counted and reported correctly in a handful of battleground states. Trump is not trying to appeal to more voters with popular ideas. He is appealing to those who already support him and aiming to suppress the votes of others. This election is about whether the vote suppressors will get away with it sufficiently to steal the election.

Here are the main avenues of vote suppression that the president is pursuing.

Purge voter rolls. In many states, the GOP has undertaken an aggressive voter purge. The Brennan Center for Justice says 17 million voters were purged between 2016 and 2018. In 2017, a mass purge of more than half a million voters in Georgia conducted by Secretary of State Brian Kemp led to the governor’s election going to… Brian Kemp. (Democratic candidate Stacey Abrams never conceded.)

Cripple the U.S. Postal Service and then call it lame. Because of the pandemic, voting in person is riskier than usual. As the pandemic affects low-income communities and Black people disproportionately, it will also tend to reduce voter turnout in those communities. Early, absentee, and all forms of vote-by-mail (including hand delivering a ballot that was received by mail) are the safe alternatives.

True to form, Trump regularly disparages vote-by-mail. Even more dangerously, he and Senate Majority Leader Mitch McConnell are refusing to fund the USPS, and the new postmaster has declared new rules to slow the delivery of U.S. mail. The libertarian billionaire campaign against the USPS has been brewing for years and is now boiling, just when the post office is most needed for safe and fair elections. Trump admitted on August 13 that he’s undermining the post office to make voting harder. Candidates and voters are suing to prevent the post office being sabotaged, and Postmaster General Louis DeJoy has indicated some of the changes will be delayed until after the election. Still, the brazen attack on a popular institution just when it is needed most will work to the extent people mistrust the mail.

Eliminate polling places. Most poll workers are seniors, and because of the pandemic, many probably will choose not to work on Election Day. That in turn will likely lead to the closing of many polling places and longer lines at the few that open. For the April 10 Wisconsin primary, there were only five polling places open in Milwaukee instead of the usual 180. With the higher turnout in general elections, that could mean there isn’t enough time for everyone to vote on Election Day.

Undercount votes. Since the 2000 election was decided in Florida, many people are aware that counting and recounting votes is not a simple matter. Mailed-in ballots are undercounted by as much as 20 percent in many places, and the reasons for discounting a ballot are as varied as the patchwork of state and county laws that govern voting.

Intimidate voters. Trump sent federal troops, some from Customs and Border Protection, some without insignia, to break up racial justice demonstrations in Portland, Oregon. That was just a rehearsal; he has vowed to expand the occupation of U.S. cities run by Democratic mayors. Not coincidentally, the turnout in cities like Detroit, Milwaukee and Philadelphia, with large numbers of Black voters in purple states, may determine the winner in the Electoral College. The toppling of a statue by protesters or provocateurs could be the pretext for violent occupation of the cities that could determine the election.

A second form of voter intimidation is the “Continue to Serve” initiative, whereby retired police and military personnel would serve as poll watchers, aggressively challenging voters, creating a hostile presence and fueling anxieties among voters who are already suspicious of the authorities. Republicans announced their plan last spring to recruit 50,000 poll watchers and spend $20 million in 15 key states “to shape who gets to vote in November — and whose ballots are counted,” according to The New York Times.

Allow foreign interference. Earlier this week, the Senate Intelligence Committee issued the final volume of its bipartisan report detailing evidence that Russians were communicating with the Trump campaign in 2016 and influenced the presidential election that year.

It has been established that Russia is already interfering in the 2020 election, but the president remains unconcerned. Perhaps that’s because the interference is on his behalf.

What Can We Do?

Here are some things you can do to restore a bit of integrity to U.S. elections.

Make sure you are registered to vote. If you are planning to vote, even if there is no reason for you to have been unregistered, double check that you are registered by going to Vote.org. And if you’re not registered, you can re-register! Then request a mail-in ballot from your county election board or commission. For detailed how-to information, see Vote.org and New American Voters 2020.

Vote early. Do you want to vote by mail? Or do you want to find your voting place by zip code and your street address? Vote.org can answer all these questions and more, including election dates, deadlines and rules. To derail any funny business, know your rights as a voter. Here’s a state-by-state list of how to vote by mail. And here’s a separate place to double-check all the vote-related dates and deadlines in your state.

Election Day is going to be chaotic. Get your ballot into the election board or commission well ahead of time to take the pressure off and allow more people to vote in-person under safer conditions. If you request a mail-in ballot, return it promptly.

Become a poll worker. We need people with low risk of harm from the coronavirus to become poll workers. It’s an important job, and it’s paid. (In most places you must be a registered voter in the precinct or at least the state where you want to serve as a poll worker. PollHero.org can help you learn your local regulations.)

Become a poll monitor. Lawyers can be especially helpful, but non-lawyers can train as well. You can be stationed at a polling place in a swing state, prepared to report irregularities such as intimidation, long lines, unsafe conditions or people being turned away. In some states, those complaints can be taken to an election judge for immediate mitigation.

Become an election scrutineer. Join the Scrutineers Community to learn how to scrutinize elections and keep them fair, county by county, state by state. Scrutineers will train you on how to approach local election officials and various ways you can monitor elections locally.

Join the Grassroots Emergency Election Protection Coalition. This network brings together experts in all fields of election protection for weekly Zoom calls and provides opportunity for deeper engagement and connections to other networks in specific states.

Engage with your Board of Elections. Procedurally, the vote on November 3 is not a national election; it is a collection of 3,141 separate county elections. County election boards (also known as election commissions) have a huge influence on voting rules and how they are implemented. You can help make sure the election is administered fairly, especially in the few battleground states that will determine who wins in the Electoral College. You can start by contacting your local election officials and asking how to get involved. Depending on the county, citizens can sometimes gain access to the ballot-counting process and keep an eye on official vote counters. You can request, through the Freedom of Information Act, information on what voting machines they use, how they keep records of the ballots, and how the votes will be counted and recounted. Just calling or visiting your Board of Elections will put them on notice that the public is paying attention.

Prepare to mobilize after the election. Unless there’s a landslide, litigation is likely to determine the election outcome. Intimidation by right wing Trump supporters and media spin might also play a role. You can sign up to mobilize in support of respecting election results with Indivisible and Stand Up America.

Deploy your organization’s resources. Progressive organizations, whether 501(c)3 or 501(c)4, can maintain their normal missions while prioritizing election protection. Staff, volunteers and members can be deployed by the hundreds and thousands. Every progressive group’s missions will be more difficult or impossible with another four years of political nightmare. There will be no “just recovery” from the pandemic. No improvement in health care. The feds will not confront the rise of white nationalism. Inequality will worsen. There will be no Green New Deal.

A Biden presidency doesn’t guarantee success, but it gives us a chance to fight.

Until the election is decided, arguments about policy minutiae are about as productive as discussing how many angels can dance on the head of a pin. All groups and citizens dedicated to progressive causes can fulfill their mission by prioritizing election protection for the short term.

As one Portland activist says, “If you ever wondered what you’d do if fascism came to America, you’re doing it.”

A version of this article originally appeared on Truthout.org