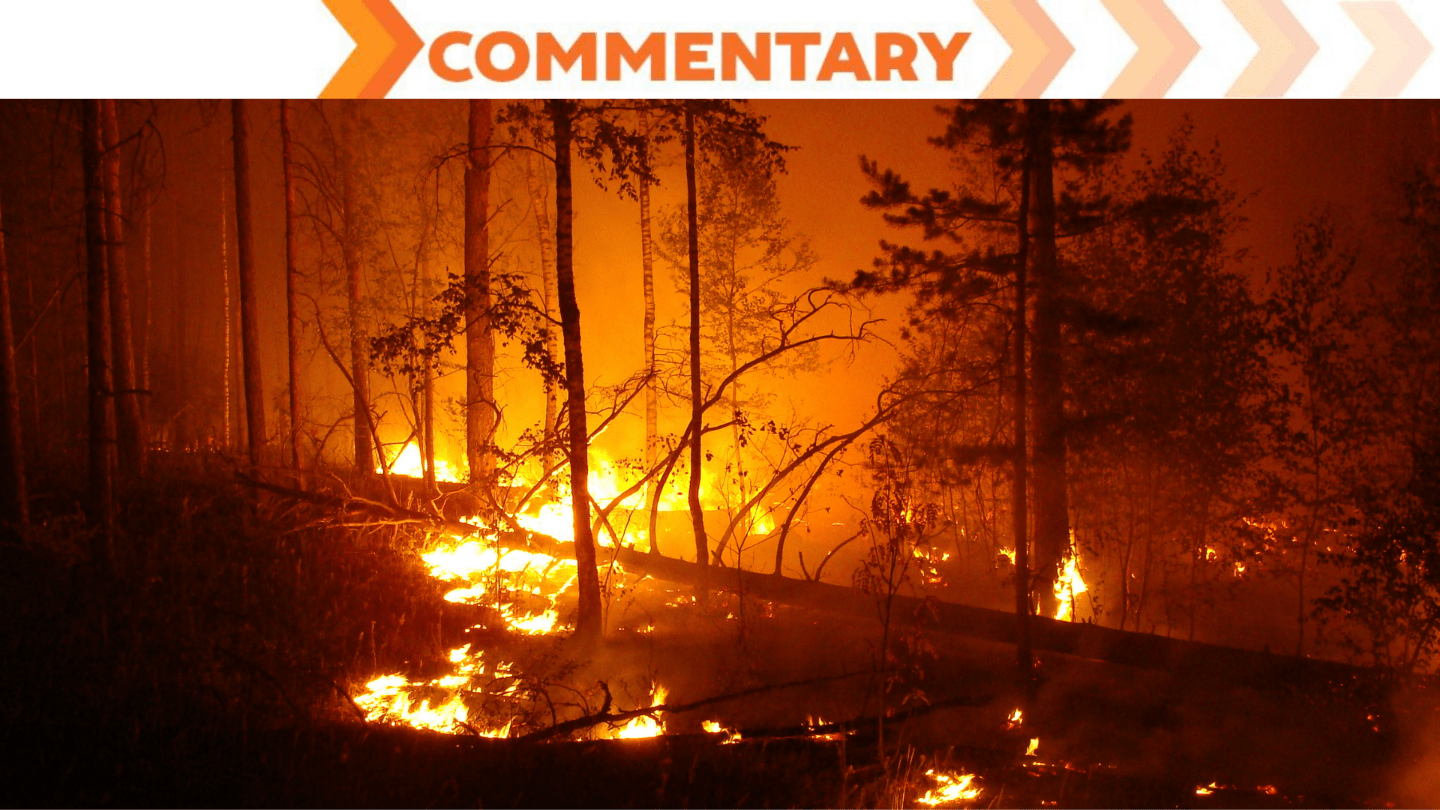 Behind the apocalyptic wildfires in California and Oregon, a more ominous trend is creeping across the globe. Everywhere in the world, trees are dying with the biggest trees going first. Entire forests are threatened, worldwide.

The 83 large wildfires burning in mid-September in Arizona, California, Colorado, Oregon, Montana, Nevada, South Dakota, and Wyoming are only one symptom of what’s happening to forests everywhere. Forests are dying.

Forests can adapt to change, but recent atmospheric warming is driving changes faster than many trees can adapt.

During the period 2012–2016, a research group at Los Alamos National Laboratory in New Mexico, led by Nathan G. McDowell, studied southwestern forests and developed a “forest drought-stress index” based on more than a thousand years of tree ring data, which reveal past drought conditions. They concluded that by the 2050s, average annual drought conditions in the southwestern U.S. will be worse than any drought in the past 1000 years. From this, they concluded that some time after 2050, conifer forests in the Southwestern U.S. will disappear. Los Alamos released a short video of McDowell discussing this conclusion. Since then, the McDowell team has concluded that during the remainder of this century half, or more, of all conifer forests in the northern hemisphere will disappear, and, furthermore, that forests worldwide are endangered by what they call “hotter drought.”

The causes of expanding tree death are complicated, but they all start with warmer air. According to NASA, since about 1890, the average temperature across the entire planet has risen 1.6 degrees Fahrenheit (0.9 °C.) This may not seem like much, but the temperature rise over land is 50 percent greater than the global average rise, so average temperature over land has risen an average of 2.4 °F (1.3 °C). This means less snow, more rain, earlier springtime, and most importantly, warmer air.

Warmer air can hold more moisture, so, as the air warms, it draws moisture out of soils and plants, including trees. This is called “atmospheric moisture demand” or “vapor pressure deficit.” This important principle explains why a wet towel dries faster in a dry-heat sauna than it does in a steam room. “The air literally sucks the moisture out of the soil and plants,” explains forest researcher A. Park Williams, author of a major study of the effects of drought on forests.

As air temperature rises, a cascade of effects kicks in. Atmospheric moisture demand extracts water from the soil, reducing the water available to the roots of trees (and other plants). Simultaneously, the rising moisture demand draws water from a tree’s leaves (or needles, in the case of conifers). As the moisture demand pulls water out of tree leaves, water inside the plant decreases and air bubbles can form in the channels that carry water inside the plant. The air bubbles interrupt water flow. This is called cavitation, and in some trees cavitation alone can cause tree death.

To preserve their internal water supply, which they need to survive, some trees close down the little valves (called stomata) in the surface of their leaves. The valves serve two purposes — they let out water vapor and they let in carbon dioxide. Carbon dioxide is the tree’s basic food. Therefore, when a tree closes its leaf valves to preserve water, it cuts off its own food supply. If this goes on too long, the tree starves to death.

But that is not all. As the planet grows warmer, spring is arriving earlier, so the fire season is now longer than it used to be — 18 percent longer, worldwide. Furthermore, as the atmosphere grows warmer, moisture that used to fall as snow is now more likely to fall as rain. When snow melts, it slowly yields water that sinks into the soil; rain, on the other hand, tends to run off the soil rapidly, leaving the soil drier than it used to be when fed by snow-melt. The change from snow to rain, combined with increased atmospheric moisture demand sucking more water out of soil, creates more drought conditions. Drought conditions in turn propel the sequence of events inside trees that can result in death by cavitation or carbon starvation.

But that is not all. Because of climate change, bigger wind storms are knocking over more trees, killing them and creating more fuel for fires. More fuel and warmer weather bring larger fires. And then there are insect infestations, which are steadily increasing. Healthy trees can usually fend off attack by tree-killing beetles (generally called “bark beetles,” of which there are 600 varieties) and the microbes that sometimes travel with them. Warmer weather allows bark beetles to reproduce faster, thus creating more of them, and warmer weather allows them to extend their geographic range, making more trees susceptible to insect death. As trees respond to “warmer drought,” they become weaker and more vulnerable to fatal attack by beetles, providing still more fuel for fire.

Aided by bark beetles, the recent decade of drought in California has killed an estimated 163 million trees, priming the forests for large fires.

Why does any of this matter? Why are forests valuable to humans?

Forests produce oxygen, and they shelter 80% of the world’s biodiversity. Three hundred million people live in forests, and 1.6 billion people make a living there. Trees keep us cool and they absorb tremendous amounts of carbon dioxide, the main gas responsible for the global warming emergency. As forests die, they release stored carbon dioxide into the atmosphere, warming the planet further, killing more trees.

Forests slow water runoff, allowing groundwater to be replenished, and they hold soil in place, preventing water and wind from moving it into streams and lakes.

And of course, forests provide timber. When we think of commercial forestry, we may think of clear-cuts, endless acres of tree stumps and eroding soil. But it does not have to be done that way. For 150 years the Menominee people of northwestern Wisconsin have sustained their forest, which in turn has sustained them, providing income from a small lumber mill. It’s possible for modern humans to live within the boundaries of natural systems, but to do so they will need the help of indigenous people. When the Pilgrims arrived in New England, they found native people managing fire beneficially — a practice the newcomers soon outlawed. It’s time to rethink all those relationships.

To preserve the world’s forests we would have to overcome the power of the fossil fuel corporations, which have kept us locked onto a path of destruction. (In recent years, governments have been subsidizing fossil fuels to the tune of $10 million per minute, every minute of every day of the year. That could stop.)

An emergency requires leadership. We don’t have that. President Trump is out of touch with reality. To discount the role of climate change in California’s fires, he recently said, “You have forests all over the world. You don’t have fires like you do in California.” As he spoke, the Arctic, Argentina, Australia, Brazil, Indonesia, and Siberia were experiencing “their worst wildfires in decades, if not all of recorded history,” the New York Times reported. He also said recently “I don’t think science knows” what’s causing record-setting wildfires in the western states. That’s his way of saying, “There’s nothing to be done.” But the Trump administration has done plenty: in the past three years they have taken more than 160 actions to make the climate emergency worse.

It seems apparent that a Republican-dominated federal government is not going to respond to the climate emergency. (Democrats in the Senate have published their own detailed plan; however, so long as they remain a minority, their plan molders.)

The federal government currently spends roughly $700 billion a year on the military. It spends about $15 billion a year trying to understand and stop climate change. Therefore, it seems safe to assume that Republicans are simply not up to the challenge. To bring the wildfire problem under control, we would have to treat the climate emergency like the emergency it is. That would require new leadership.