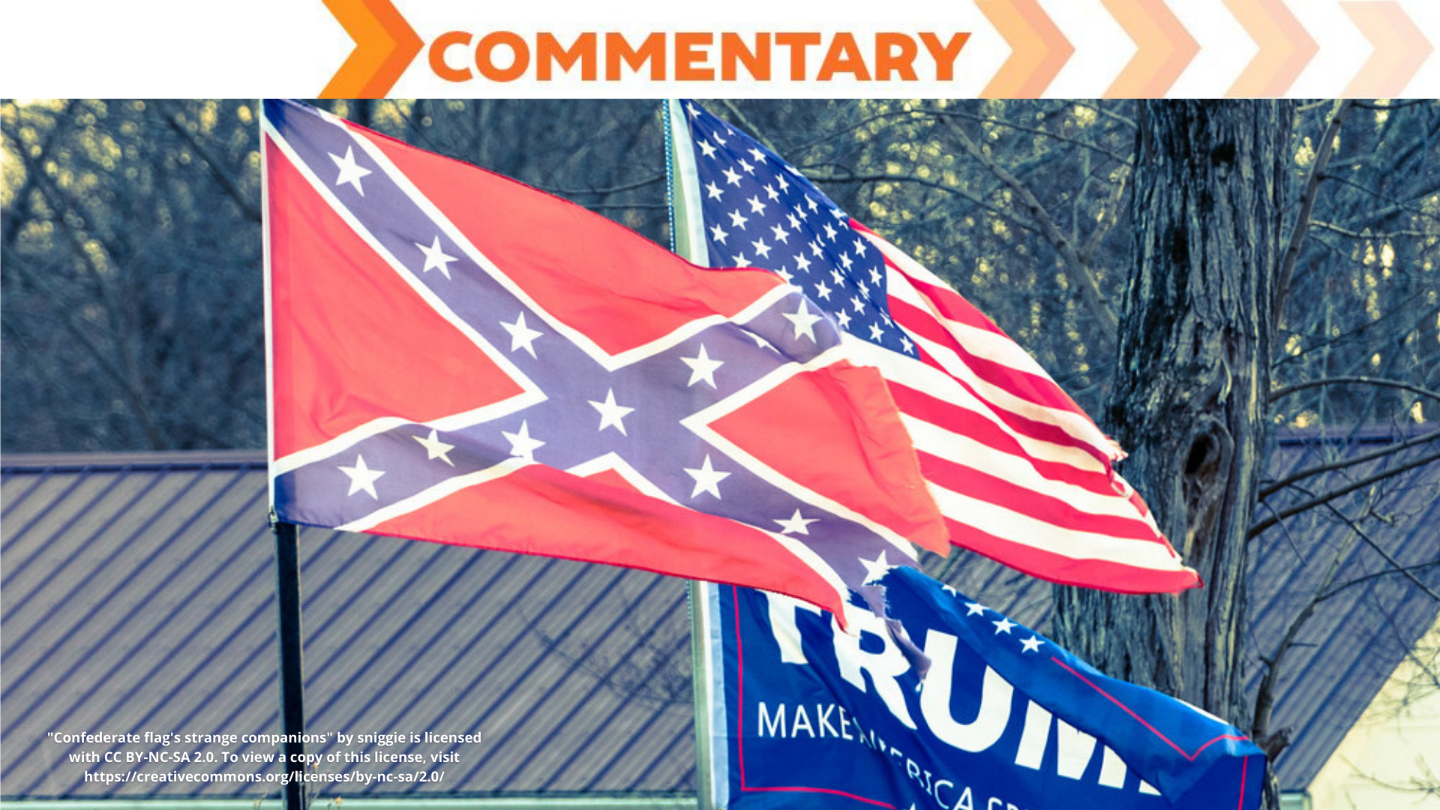 Who are the Trump-supporting democracy-hating insurrectionists who swarmed the Capitol building in Washington, D.C. on January 6, 2021? Bottom line: They are the screwed.

Babies are not born racists or Nazis or misogynists or religious fanatics. Yes, a few are born sociopaths or suffer from severe narcissism and cannot help themselves, but mainly we should recall the song “Carefully Taught,” from the play South Pacific (1949):

Be drummed in your dear little ear

Whose eyes are oddly made

And people whose skin is a different shade

Before it’s too late

Before you are six

To hate all the people

Who are the democracy-haters and insurrectionists? They are people engaged in politics — violent politics, but politics all the same.

Politics is about people seeking deference, income, or safety (or some combination of those three). The democracy-haters, in their own ways, are seeking those things.

Many of the insurrectionists see themselves in a political movement (though not necessarily all in the same political movement), inspired by their deranged führer whose incitements give their lives meaning, purpose and fulfillment.

The democracy-haters fall into 15 groups:

1. Nazis and others who have committed their lives to white supremacy and anti-Semitism (Proud Boys, Ku Klux Klan, Stormfront, and other so-called “white nationalists”). Their total numbers are unknown. In 2017, a study of nine “alt-right” web sites found 839,000 unique individual site-users, so that provides a ballpark estimate. Even if “alt-right” believers had doubled during the reign of mad king Donald, they would remain only one-half of one percent of the U.S. population; nevertheless, many of them are armed and dangerous. A recent report says violent rightwing actors were responsible for 41 politically motivated attacks and plots in the first half of 2020, while “far-left” actors were responsible for 12. The FBI has warned of further armed protests being planned.

2. People with “antisocial personality disorder” (commonly labeled sociopaths or psychopaths) are thought to be born that way; they can’t control themselves. They are an estimated 3.7 percent of the population (or about 12 million individuals, probably including the führer himself). They know right from wrong but don’t care; they cannot feel empathy, guilt, or remorse.

3. People with narcissistic personality disorder (likely including the führer) also aren’t in control of themselves; they make up an estimated 6.2 percent of the population (or about 20 million people). They are “prone to both verbal and physical aggression.”

4. Many hustlers and hucksters seeking power over others, thinking it will bring them income and deference. In the U.S. population, their numbers are unknown but likely large. Unregulated neoliberal capitalism encourages and even celebrates them.

5. Evangelical Christians who in 2018 were 25.4 percent of the U.S. population (or 83 million people) and now constitute 34 percent of the Republican Party. White evangelicals tend to be white supremacists, though of course not all are. Recall that the KKK began as a Christian organization. Evangelicals like to picture Jesus of Nazareth as a blue-eyed white man, which, as a Palestinian Jew living in first-century Galilee, he almost certainly was not.

A poll in 2015 revealed that 44 percent of Republicans favor installing Christianity as the official U.S. religion, contrary to the Constitution. Many theocrats would like Christian law (the ten commandments, not the beatitudes) and harsh Biblical punishments to replace the U.S. Constitution and secular law. Perhaps their religious vision subordinates their drab earthly life to a larger transcendent purpose.

Among evangelical Christians there are two noteworthy sects: dispensational premillennialists and reconstructionists, both of whom believe the world will (or must) deteriorate dramatically to pave the way for the second coming of Christ. Some of them are doing their best to make civilization collapse, which they see as their Christian duty to hasten the second coming; others merely stand by and do nothing, secure in their belief that unfolding catastrophes (global warming, pandemics, extinction of species, decimation of ocean life, economic depression, social chaos) are signs of the imminent return of Christ.

6. Trump’s “army of the aggrieved” — white, and mostly men — grew up with unrealistic expectations of material advancement (and the status and respect that goes with it) based on their parents’ fortunate experience with managed capitalism (1945–1975). Bitterly disappointed by their stagnant wages and lack of social advancement, many of them in 2020 have turned to authoritarianism as their hopes have been dashed by a world radically changed by neoliberal policies (enacted since 1980 chiefly by Republicans with some help from Democrats):

– many good jobs sent overseas or to Mexico;

– remaining jobs paying low wages with limited (or no) benefits and few opportunities for advancement;

– much uncertainty and insecurity built into remaining jobs;

– fewer people participating in the fellowship of regular churchgoing.

– unprecedented rates of divorce, out-of-wedlock births, joblessness, and suicide (by guns, alcohol and drugs) in many crumbling small towns and cities;

7. A few well-to-do members of the Tea Party (a fake “grass roots” formation created by oil and tobacco money and by the Koch brothers’ network of billionaires) are angry that Black people (and Muslims) are widely thought to deserve the same opportunities and protections as white Christians, thus threatening whites’ standing in the traditional U.S. racial and religious hierarchy.

8. Some footloose young people (mainly men), callow, ignorant, bored, and curious about what these all these other noisy people are doing. It looks like it might be fun, kind of a lark.

9. Some believers in any number of conspiracy theories — anti-vaxxers, Qanoners, deep staters, believers in mind control by extraterrestrials, religious nuts of every stripe — love Trump, perhaps because they sense he’s one of them. For many true believers, life is unbearable or deeply unsatisfying so they conjure a new reality. They then inhabit a closed world because their beliefs cannot be falsified — as they see it, any evidence that challenges their beliefs has been manufactured by evil-doers as part of whatever conspiracy they embrace. Some could be brought back to reality by extensive psychotherapy; others are hopelessly deranged.

10. Some youngsters who were used, abused or abandoned by parents (who themselves were perhaps used, abused, or abandoned) have now grown up to be haters. Child mistreatment is common in the U.S.; in 2018, child welfare agencies conducted 3.5 million investigations and provided 1.9 million children with protection of some kind.

11. Some (perhaps many) democracy-haters have suffered traumatic brain injuries [TBI] and now are experiencing chronic traumatic encephalopathy [CTE], a progressive and continuing deterioration of brain function — brought on by hits to the head during boxing, hockey, wrestling, soccer, rugby, mixed martial arts, Nascar driving, domestic abuse, incarceration, bar fights, car crashes, and various other common causes of head injuries like falling down drunk or running into something. A single hit to the head can cause a TBI; a single hit to the head, or far more likely a series of hits, can cause CTE, which then progresses on its own. Complete data on the prevalence of TBI and CTE are not available; however, football is known to be a common source of TBI and CTE. In some locales, where tackle football is practically a religion, children start playing football as young as age 5. Complete data are missing, but military service is also known to be a major cause of CTE; since 2001, at least 350,000 brain injuries have been reported by the military, and this is almost certainly an undercount. People with CTE are commonly reported to tend toward erratic, explosive, aggressive behavior and have trouble making sense of their world.

12. Many in the U.S. have been exposed to harmful quantities of the toxic metal, lead. If we assume that most the democracy-haters fall in the age-range 20 to 70, then, for these individuals, toxic exposures would have begun in the period 1950–2000, before and during the phase-out of lead in gasoline and in paint. Combined with TBI and CTE, lead toxicity could explain much aberrant behavior among haters. Lead in children’s blood at levels once considered “acceptable” by the Centers for Disease Control and Prevention [CDC] were known to cause the loss of 4 to 7 IQ points. Lead levels commonly found in U.S. children during the 1990s are associated with aggressive behavior, delinquency, attention deficits, loss of impulse control, and violence. Exposure to toxic lead remains a widespread problem today. In 2020, a study of tap water in U.S. homes found that 40% contained quantities of toxic lead that exceeded recommended limits for lead in drinking-water in schools, and 15% contained enough lead to reduce IQ in babies fed infant formula. Moderate brain damage from exposure to toxic lead is a serious, widespread problem in the U.S.

13. Men and women who endorse ‘hegemonic masculinity’ — “an idealized form of manhood where White, heterosexual men have power, status and dominance over women, gay men, men with disabilities, racial or religious minorities and other groups.” These believers support Trump, new research shows.

14. Victims of hate radio and other intentionally-false mass media (e.g., Fox News, Sinclair radio), and social media. Ever since the repeal of the 1949 Fairness Doctrine in 1987 (compounded by enactment of Section 230 of the Communications Decency Act in 1996), mass media and social media have been free to publish as fact material that they know (and intend) to be completely untrue. As historian Jill Lepore has written, “the rules that prevail on the internet were devised by people who fundamentally don’t believe in government.” Democratic government is a machine, and repeal of the Fairness Doctrine essentially broke the U.S. machine, Lepore tells us: “…its safety mechanisms sawed off. It has no brake, no fail-safe, no checks, no balances. It clatters. It thunders. It crushes the Constitution in its gears. The smell of smoke wafts out of the engine room. The machine is on fire.”

Because public education has been underfunded and disrespected for the past 40 years, many U.S. citizens have grown up unable to discern fact from fiction, especially when it is presented in colorful moving pictures. One result is that 77 percent of Republicans believe the 2020 Presidential election was stolen from them. Meanwhile Forbes, the Republican-leaning business magazine, reports that allegations of 2020 voter fraud are false.

15. Children from the bottom two deciles of their 6th-grade class, who’ve grown up poorly-prepared and ignorant, are now being duped and trained to be haters by people in one (or more) of the first 14 categories listed previously.

16. Of course, many of these problems may occur in combination within a single individual — the problem of cumulative impacts. Normal babies may evolve into haters as they experience harsh parenting, unrealistic expectations of easy wealth and false guarantees of social dominance, exposure to toxic lead from an early age, deteriorating brain function from many kinds of head trauma (contact sports, automobile crashes, military service, and more), exposure to white-supremacist Christian theocracy (or other cult inducements, such as Qanon or anti-vaccine hucksters), persistent, intentional mis-representation of reality by professional media liars…. The possible number of mind-modifying combinations is virtually limitless.

17. And now, on top of all these life-forming, behavior-modifying factors, our freedoms have been constricted by COVID-19. Grrrrr. Someone must be blamed. Someone must pay. On to the Capitol!

As an obvious first step, crack down on far-right white supremacists, Nazis and insurrectionists. Just because we can partially explain their behavior does not mean we have to tolerate it. We can feel sorry for them — they are the screwed ­– and still know we are required to punish their antisocial behavior for the protection of democracy and society. So far, U.S. society under Trump has appeased them, perhaps hoping they would behave better as time went on; they haven’t and they won’t.

To me the important question for our democracy is, what can government do to help babies grow up to be different from these people? That will require another essay.