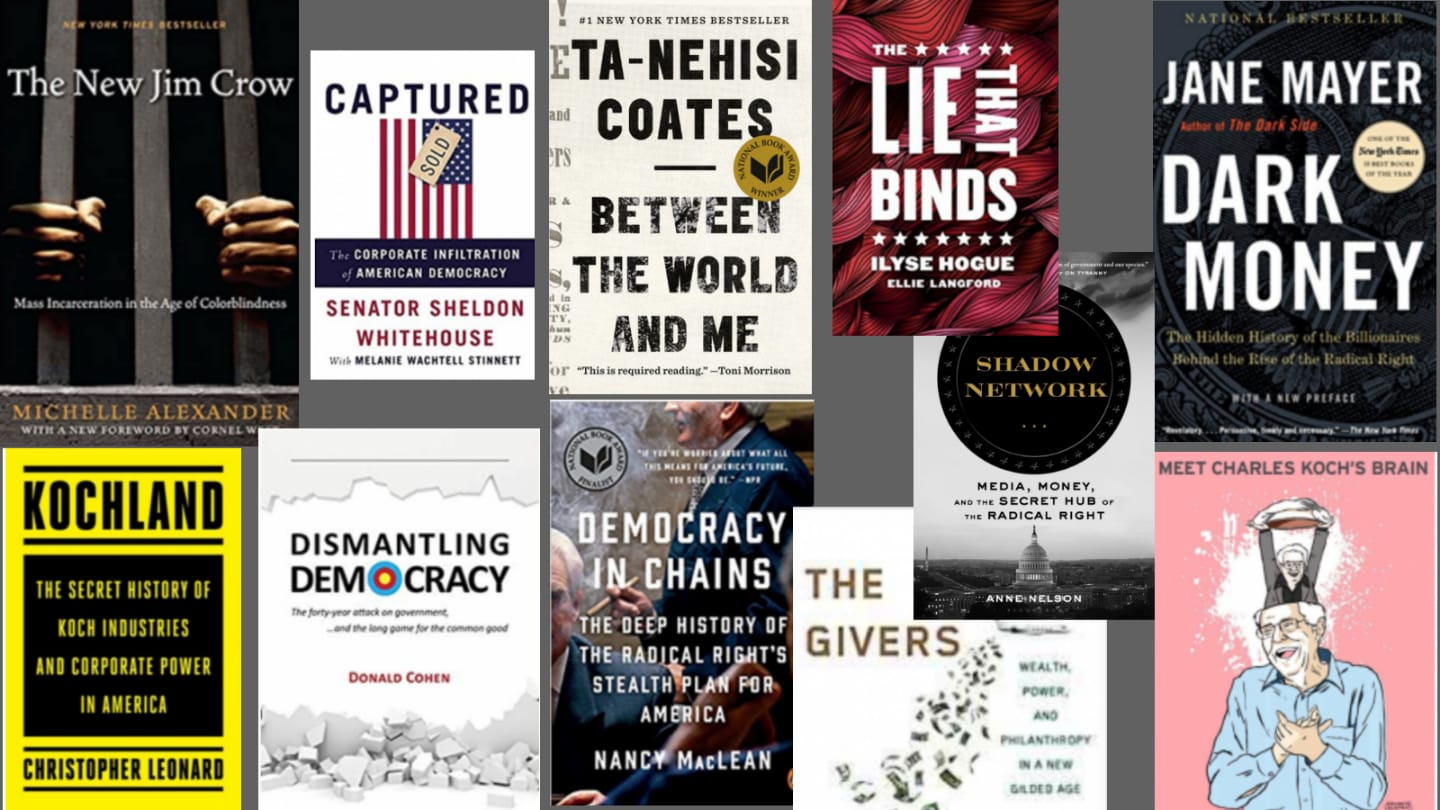 Here are some of the books we think are essential reading about the health of American democracy and distortion of public policy by rightwing billionaires and reactionary forces.

BOLD ReThink will be also be featuring books that describe BOLD ideas to reform and remake 21st century democracy, like Jeremy Rifkin's new book: "The Green New Deal; Why the Fossil Fuel Civilization Will Collapse by 2028, and the Bold Economic Plan to Save Life on Earth." Dismantling Democracy: The forty-year attack on government, ....and the long game for the common good (2018)

In this history of the attack on government after the Powell Memo, Donald Cohen of In the Public Interest details how right-wing groups, CEOs, politicians, and academics worked in concert to change public attitudes toward government and its role in American society, attacking core functions of government. This book also details how to strengthen a movement rooted in protecting and advancing the common good. For more information, see also Charlie Cray/ Greenpeace's analysis: "The Lewis Powell Memo: Corporate Blueprint to Dominate Democracy." See also, "The Kingpins of Carbon and Their War on Democracy," Greenpeace (2014). This book details how Super PAC spending has helped advance a corporate and CEO agenda to gut regulations written to protect the health and well-being of Americans. It also describes right-wing efforts to thwart mitigation of climate change and to capture the U.S. Supreme Court. Democracy in Chains: The Deep History of the Radical Right's Stealth Plan for America, Nancy MacLean (2018)

In Democracy in Chains, Professor Nancy MacLean details how Charles Koch has tried to limit democracy in the U.S. and abroad through funding universities, based on papers of the economist James Buchanan, who led a Koch-funded center at George Mason University. The New Jim Crow: Mass Incarceration in the Age of Colorblindness, by Michelle Alexander (2012)

The book documents how the U.S. criminal justice system has been used to impose second class status on black Americans, arguing that despite the election of Barack Obama as the first black president, "we have not ended racial caste in America; we have merely redesigned it." The Givers: Money, Power, and Philanthropy in a New Gilded Age, David Callahan (2018)

David Callahan describes how, with the widening wealth gap, philanthropy has become the vehicle through which billionaires wield increasing power. In this book, he discusses the way Charles Koch has weaponized philanthropy to accomplish his agenda to change American democracy. This new book, by noted investigative reporter Christopher Leonard, details how Charles Koch and the private corporation he controls dramatically expanded their wealth and changed American politics to protect and expand that fortune over the past 50 years. The Lie That Binds, Ilyse Hogue with Ellie Langford (2020)

This book details how the Radical Right has used opposition to women's reproductive rights as a Trojan horse to move a regressive, unpopular corporate agenda under the guise of motivating voters to cast their votes based on "morality." In this revealing book, Jeff Nesbit details how oil and tobacco interests joined together to fuel the rise of the Tea Party in response to the election of President Barack Obama. This account includes new information about the role of Charles Koch and his operatives. Dark Money, The Hidden History of the Billionaires Behind the Rise of the Radical Right, Jane Mayer (2015)

Dark Money is Jane Mayer’s landmark book about Charles Koch and his political empire. It details myriad dark money operations, like Americans for Prosperity, which Koch launched to influence American elections to advance his personal agenda. As soon as President Obama was sworn in, right-wing groups joined forces to thwart his progressive mandate. In The Machine, Lee Fang provides an important guide to these groups including several funded by the Koch family fortune.

[The books and descriptions above that discuss the singular role of Charles Koch in distorting our democracy were curated by Lisa Graves and Connor Gibson/KochDocs.org.]