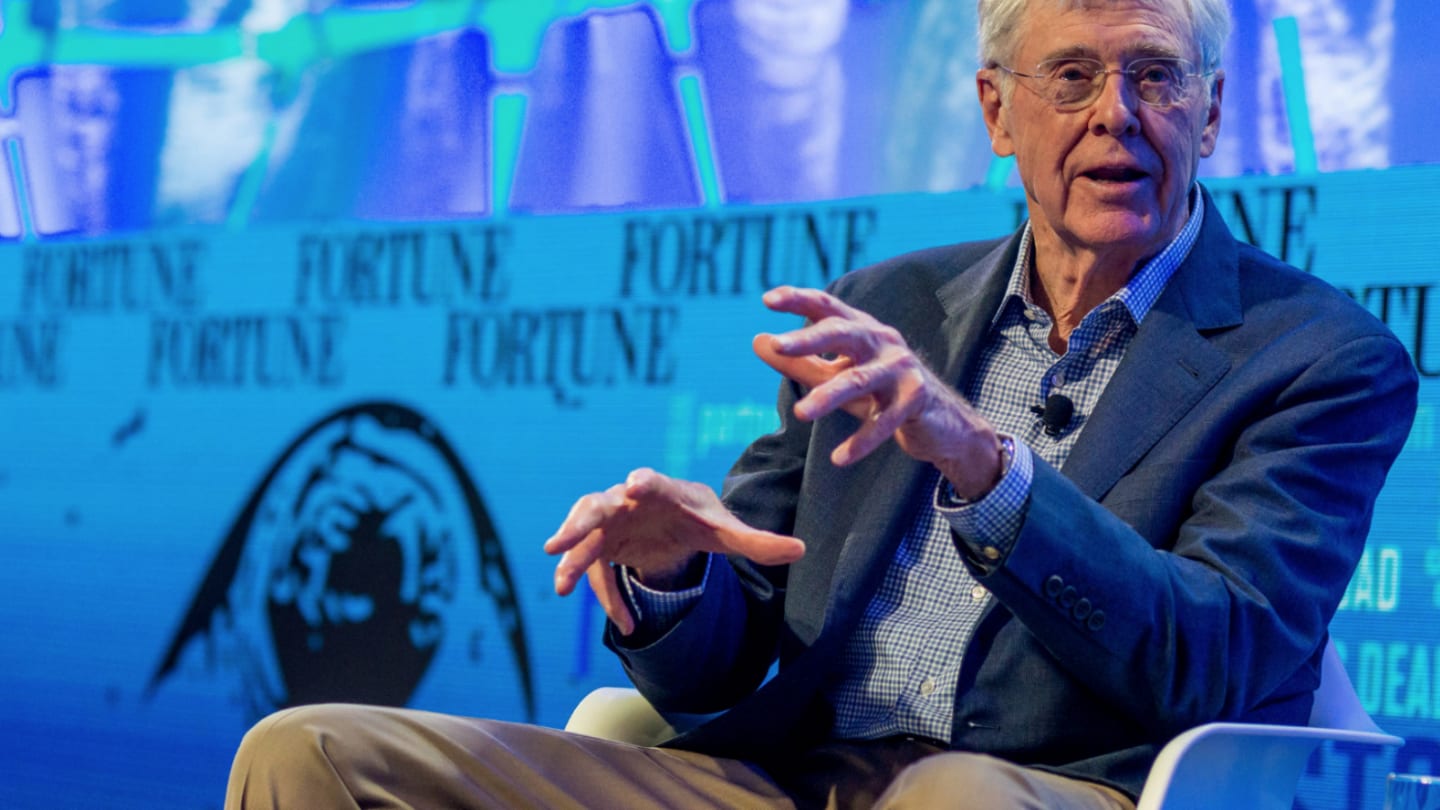 FILMS + VIDEOS ABOUT CHARLES KOCH'S DISTORTING OF OUR DEMOCRACY

Trump, The Koch Brothers and Their War on Climate Science, The Real News Network, Danny Glover (2018)

This documentary short, narrated by Danny Glover, reveals how the longstanding campaign of Koch Industries against the reality of climate change has shaped Donald Trump’s presidency.

Democracy Now interviews Lee Fang who reported that the Kochs’ secured a number of policy victories from the Trump administration.

This documentary, narrated by Emma Thompson, sheds light on the efforts of Charles and David Koch to thwart governmental action to try to mitigate the dangerous climate changes that are underway.

Following the release of her book Democracy in Chains, Nancy MacLean sheds light on the Kochs’ relationship with right-wing economist James Buchanan, in this interview on Democracy Now.

How the Kochs Tried (and Failed) to Discredit Reporter Jane Mayer After She Exposed their Empire, Democracy Now (2016)

Jane Mayer discusses how Koch operatives hired a private investigator in an attempt to discredit her in response to her 2010 reporting on the Koch network.

This video accompanies an investigation by the International Consortium of Investigative Journalists (ICIJ) into “Arteva Europe, a Koch Industries company whose Swiss branch makes hundreds of millions of dollars in interest income, pays very little tax, and – mysteriously – has no staffing costs.”

This documentary film by Robert Kenner depicts how a group of industry-funded pundits use the tobacco playbook of propaganda to obscure the truth, misleading the public about the dangers of climate change by sowing doubts about the science demonstrating the cause of the devastating climate changes that are underway. The movie is heavily based on the book Merchants of Doubt by Naomi Oreskes and Erik Conway,

This recording was published by Lauren Windsor for The Undercurrent, with accompanying articles in The Nation. The recording is from the Koch network’s June, 2014 donor summit in Dana Point, California. This recording was made years before Charles Koch started taking steps to make his speeches to fellow political donors public.

This documentary short by the New York Times examines the influence of Koch Industries on local political and cultural level in Wichita, Kansas.

Democracy Now interviews Lisa Graves on her investigation into Charles Koch’s role in the John Birch Society, including his fundraising for it, at the height of its attacks on the U.S. Civil Rights movement. This report and source documents were published by the Center for Media and Democracy.

Following the 5-4 ruling of the United States Supreme Court in the “Citizens United” case, Citizen Koch tells the story of former Governor of Wisconsin Scott Walker’s recall election and how Koch money influenced the outcome of that election and others. The movie faced financing issues and a delayed release thanks to David Koch’s influence at PBS, as Jane Mayer reported for The New Yorker in 2013.

This award-winning documentary film by Craig Rosebraugh tells the story of how and why special interests in the fossil fuel industry are casting doubt on climate change. The film has a distinct activist tone, and it is not exclusively centered on the Koch network.

In a short documentary that aired on Al Jazeera America, three filmmakers document the influence of Charles and David Koch and show how their efforts following President Obama’s election in 2008 were ramping up in opposition to his re-election in 2012.

In an interview with Democracy Now, Lee Fang details how the Kochs’ Americans for Prosperity played a leading role in pushing anti-union “Right to Work” legislation in Michigan.

This documentary, narrated by noted journalist Bill Moyers, explores how the American Legislative Exchange Council, or ALEC, has dramatically changed laws in states across the country to advance the agenda of the corporate and special interests that fund it, including Koch Industries and other groups funded by the Charles Koch fortune that have a voice and a vote with state legislators on ALEC task forces.

In this short video, Pulitizer Prize-winning cartoonist Mark Fiore uses heavy satire to illustrate how the Citizens United decision has unleashed the Koch Brothers and other super-rich interests to create dark money groups to influence elections without revealing the sources of the “big secret bucks” being spent.

Was the Tea Party actually a spontaneous uprising of Americans angry about taxes in 2009 or was it a front group for billionaires upset about the election of President Barack Obama? Taki Oldham answers these questions and more in his depiction of the right-wing wave sweeping America that influenced the outcome of the 2010 midterm elections and putting the GOP leaders in key roles in Congress. Transcript available here.

The first of a three-part video interview of David Koch and Americans for Prosperity president Tim Phillips on Capitol Hill to attend the swearing-in ceremony of John Boehner when he became Speaker of the U.S. House of Representatives. Interview by Lee Fang for ThinkProgress.

The second of a three-part video interview of David Koch and Americans for Prosperity president Tim Phillips on Capitol Hill to attend the swearing-in ceremony of John Boehner when he became Speaker of the U.S. House of Representatives. Interview by Lee Fang for ThinkProgress.

The third of a three-part video interview of David Koch and Americans for Prosperity president Tim Phillips on Capitol Hill to attend the swearing-in ceremony of John Boehner when he became Speaker of the U.S. House of Representatives. Interview by Lee Fang for ThinkProgress.

In this animation about the Koch brothers, Taki Oldham uses images to present the reality of the Charles Koch’s climate denial machine and how he and his brother, David, have used their vast wealth to subvert the scientific consensus on climate change.

This video was published by Brad Johnson for ThinkProgress in 2011. Then-Senator Scott Brown of Massachusetts was captured on film asking David Koch for more campaign cash. Brown lost his U.S. Senate seat to Elizabeth Warren in 2012.

This except of Taki Oldham’s 2010 documentary film, Astroturf Wars, reveals David Koch giving a speech at an Americans for Prosperity (AFP) event. David Koch was the founding chairman of the AFP Foundation at the time. The video contrasted Mr. Koch’s public claim that he was unaffiliated with the “tea party” movement in the U.S. in 2009-2010, as several local AFP chapter leaders are seeing reporting their success in organizing tea party rallies directly to Mr. Koch.

(This selection of films and videos was curated from a wider set prepared by KochDocs.org; Lisa Graves and Connor Gibson are co-curators of that clearinghouse on the Koch Empire.)