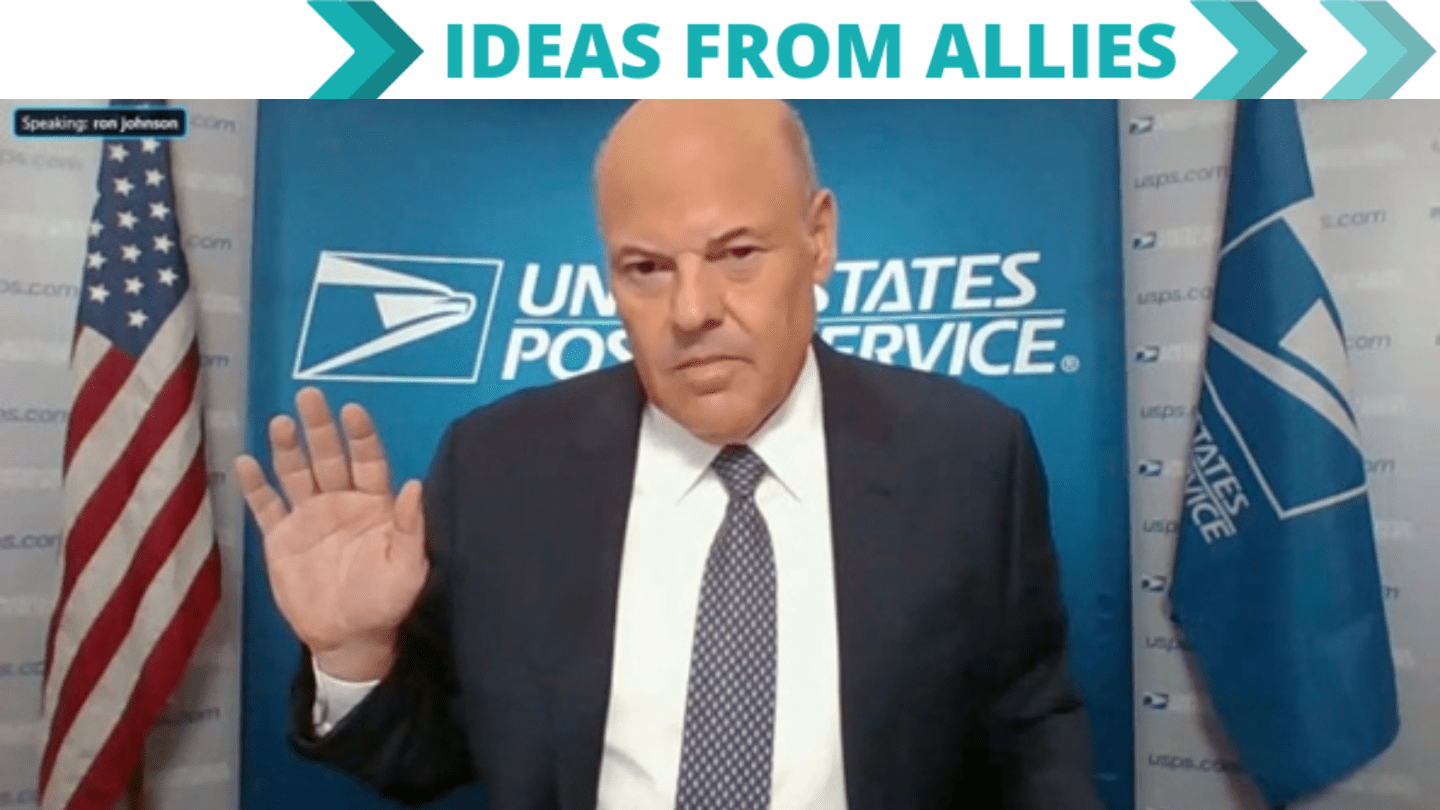 Trump-Appointee Louis DeJoy Continues Destructive Plans For US Mail, as Calls For His Removal and For Major Postal Reforms Rise

By Lisa Graves and Evan Vorpahl

On Wednesday, February 24, the House Committee on Oversight and Reform will hold a hearing on options for reforming the US Postal Service to help ensure it delivers the services Americans rely on and need. The committee has invited the Postmaster General, Donald Trump’s appointee Louis DeJoy, and others to testify about the failures at the post office.

Many lawmakers and concerned citizens have renewed calls to remove him from his post, which has no term limit. He could stay in that post for decades, like a Supreme Court justice, unless removed. Thirty-four Democratic Senators also wrote a letter to DeJoy this past week about the severe delays in the delivery of mail over the holidays and other disruptive changes he made before the election.

This hearing comes in the wake of news that DeJoy is planning to eliminate first class mail and increase the price of mailing  in order to charge people more for slower delivery — a path some have called “sabotage.”  The plan would basically put all first-class mail designated for 2-day delivery into the same category as 3- to 5-day mail, and it would ban first-class mail from being shipped by air.

As the Washington Post noted, “The delivery slowdowns coupled with price increases, mailing industry officials say, could threaten that system by driving commercial mailers to cut costs and pull more volume out of the mail stream. In the long run, that could force the Postal Service to increase postage rates on the customers left in the system — including small businesses, seniors and people with disabilities — or to further cut service.”

The need to cut costs can be traced to the requirement that the Post Office pre-fund retiree health care benefits. No other government agency operates under this financial mandate, which was first imposed in 2006. Charles Koch and allies have long wanted to privatize the post office, and with the help of James C. Miller III, a George W. Bush appointee, the pre-funding requirement was pushed through as a step toward that goal. The Postal Service actually had $700 million more in revenue than its operating expenses last year — but the pre-funding liabilities requirement helps push its books into the red.

How Could DeJoy Be Fired?

Decades ago, the position of Postmaster General was reclassified from a cabinet position (selected by the president) to one chosen by a Board of Governors. That means the president cannot fire him.

There is no historical precedent for impeaching an executive branch official who is not Senate-confirmed. There is also almost no possibility that a GOP minority in the Senate that was unwilling to convict Trump for inciting the violent insurrection on January 6 would back efforts to remove DeJoy, a major fundraiser for the RNC, Trump and numerous Republicans. (Notably, before he took over the Postal Service, DeJoy had reportedly pressured employees to give to GOP politicians he preferred and rewarded those gifts with bonuses, a claim he denies despite the evidence.)

In 1970, when Congress created the Board of Governors for our Postal Service, the change was supposed to limit political influence over the provision of these vital public services that should have no place for extreme partisanship. Proponents of those reforms failed to imagine how the term limits for board members could be manipulated by Senate leaders to wield power to manipulate the hiring process and install a hyper-partisan Postmaster General bent on paving the way to privatizing the very institution they were tasked to protect.

That Congress of 50 years ago never envisioned a Senate leader like Mitch McConnell (R-KY), who has sought to install Postal Service leaders keen on privatization. Or a Postmaster General like Louis DeJoy, a partisan fundraiser who ran his family’s logistics/delivery business like a literal sweat shop and whose dictates hobbled the Postal Service on the eve of an election in the middle of a deadly pandemic.

DeJoy’s dictates were temporarily halted by federal judges issuing restraining orders to protect the delivery of ballots in the 2020 election, after Trump made clear he wanted to interfere with absentee voting and lied repeatedly about voter fraud.

Last month, after Biden’s inauguration, the Postal Service announced it would not continue appeals of those orders, but that it would continue to press for changes in how mail is delivered in America.

Congress played a key role in objecting to those changes and raising public awareness of the destructive policies being pursued by DeJoy. At one point last summer, DeJoy boasted about his success in making sure more mail trucks left on time, even though it was clear that measurement meant that more mail was being left behind. Due to DeJoy’s actions, countless seniors who rely on the timely delivery of medicines were left without the prescriptions needed to protect their health. Thousands of baby chicks died because they were not delivered on previously reliable schedules, and more chaos ensued as rapid sorting machines were not just taken offline but dismantled to prevent reuse.

If there were any real accountability by the Board of Governors, DeJoy would have been fired last summer based on the disruption of mail delivery during his first few months on the job. If he were a probationary employee at almost any business in America, he would have been terminated.

But the board had been stacked with Republicans by Trump and Senator McConnell. The then-Senate majority leader used his power to get Trump to put one of McConnell’s top partisan fundraisers, Mike Duncan, on the Board of Governors, which then made him chair of the board.

McConnell gamed the appointment process to get Duncan the longest term of all the open seats on the board, which the Senate majority leader had kept vacant during President Obama’s second term. (McConnell’s hold was said to be in response to Senator Bernie Sanders (I-VT) placing a hold on Miller, a longtime Koch ally who was on the Board of Governors from 2003-2011 and was one of McConnell’s picks for the Board.)

In 2020, McConnell’s fundraiser Duncan used his post chairing the board to push for the selection of DeJoy to be the Postmaster General, even though DeJoy was not one of the candidates recommended by the executive search firm hired by the Postal Service. Trump’s Treasury Secretary Steve . Mnuchin conditioned $10 billion in credit approved by the CARES Act on requiring the Postal Service to give him proprietary information about “its 10 largest ‘negotiated service agreements,’ or contracts with high-volume third-party shippers such as Amazon, FedEx.”

With all the failures and radical changes under DeJoy, several legislators have recently called on President Biden to fire the Board of Governors and appoint an entirely new board. (The new nominees could not be filibustered because, during the Obama administration, the Senate voted to override the Senate’s rules to prevent filibusters of nominees under Rule XXII, the “cloture” rules to end a debate.)

President Biden could appoint up to five members of the board, a majority sufficient to vote to remove DeJoy or to force DeJoy to resign. That is effectively what happened in 2019 — when it became clear that Trump would be able to appoint a majority of the members of the board. Postmaster General Megan Brennan — a longtime postal employee and the first woman to hold the post, whom Trump had criticized and wanted to fire — soon announced her retirement.

However, Biden has signaled that he is not inclined to fire the board rather than fill the vacancies as they arise, which would leave DeJoy in place for at least another two years based on the board’s term limits.

With the new wave of controversy over DeJoy’s latest destructive plans, will President Biden decide he has to remove Trump’s appointees and start with a clean slate of governors with track records demonstrating that they would work to protect the Postal Service as a public institution? And if so, would a majority of that board vote to remove DeJoy?

One of the two Democrats Trump nominated, Ron Bloom, was recently selected to replace Duncan as chair of the board. (Duncan’s term on the board expires in 2025). But Bloom has not publicly pushed back on DeJoy’s terrible performance before the election or in the midst of his failures that led to substantial delays in deliveries over the holiday season. Trump’s other Democratic appointee, Donald Moak, also stood by DeJoy at the peak of the election crisis provoked by DeJoy’s changes to the Postal Service.

Rep. Bill Pascrell (D-NJ) has renewed his call on Biden to fire the entire board and start over.  Sen. Tammy Duckworth (D-IL) also urged Biden to replace the entire USPS board. (True North Research called for DeJoy to be fired in its congressional testimony last September.)

Biden already replaced the chair of the Postal Regulatory Commission on January 25, removing Republican Robert G. Taub and replacing him with Michael M. Kubayanda, a Democrat. That commission is tasked with the power to approve or refuse hikes in stamp prices and other kinds of operations changes.

What Else Can Be Done to Protect and Strengthen Our Postal Service?

All is not lost, despite the uncertainty of the fate of the board and DeJoy. That is because through ordinary legislation, Congress could restructure the board, repeal the injurious rule imposed in the Bush administration regarding prepayment of future health care liabilities of future retirees and make other bold reforms. It could also put a term limit on the job of Postmaster General with the stroke of a pen.

On the campaign trail, Biden promised to support repealing the pre-funding mandate, support pandemic and emergency funding for the USPS, maintain six-day delivery mail and modernize the postal fleet. Since his inauguration, the new president has pushed for the Postal Service and other agencies to convert to EVs, electric vehicles, in order to help mitigate climate change and invest in American EV industries.

Other innovative efforts are also on the table. For example, several members of Congress have urged Biden to use the USPS to distribute the “highest quality medical-grade masks available” to the public. Sens. Sanders and Kristen Gillibrand (D-NY) and others are pushing for postal banking. Biden joined Sanders last summer in calling for the Postal Service to offer a range of consumer banking services. This is strongly supported by progressive leaders in Congress. Other innovations have included a bill by Rep. Jackie Spier (D-CA) to remove the prohibition-era restriction on USPS that it cannot deliver alcohol.

Meanwhile, there is also momentum for the USPS Fairness Act, which would repeal the unprecedented requirement imposed since 2006 that it prepay future health care liabilities of retired postal workers. Earlier this year, the press reported that “lawmakers are considering an unusual accounting maneuver to give the Postal Service a nearly $100 billion credit for years of pension overpayments, according to four people familiar with the proposal, who spoke anonymously to discuss legislative plans. The move, which legislators in both the House and Senate have discussed and has not been previously reported, would shift responsibility for those funds onto the federal government.”

Part of that deeply flawed 2006 law pushed by Miller also shifted military pensions of postal workers to the Postal Service’s books instead of being covered by the Treasury, so that too could be reversed by Congress. Until this past year’s Covid relief package, the Postal Service operated without relying on any subsidy by taxpayers, but there is no reason why the US government cannot invest in our Postal Service to help it thrive, in addition to repealing onerous obligations imposed on it by privatization advocates.

What all this means is that reforms to protect the Postal Service and its vital function in American society are coming, with or without the support of Trump ally Louis DeJoy.