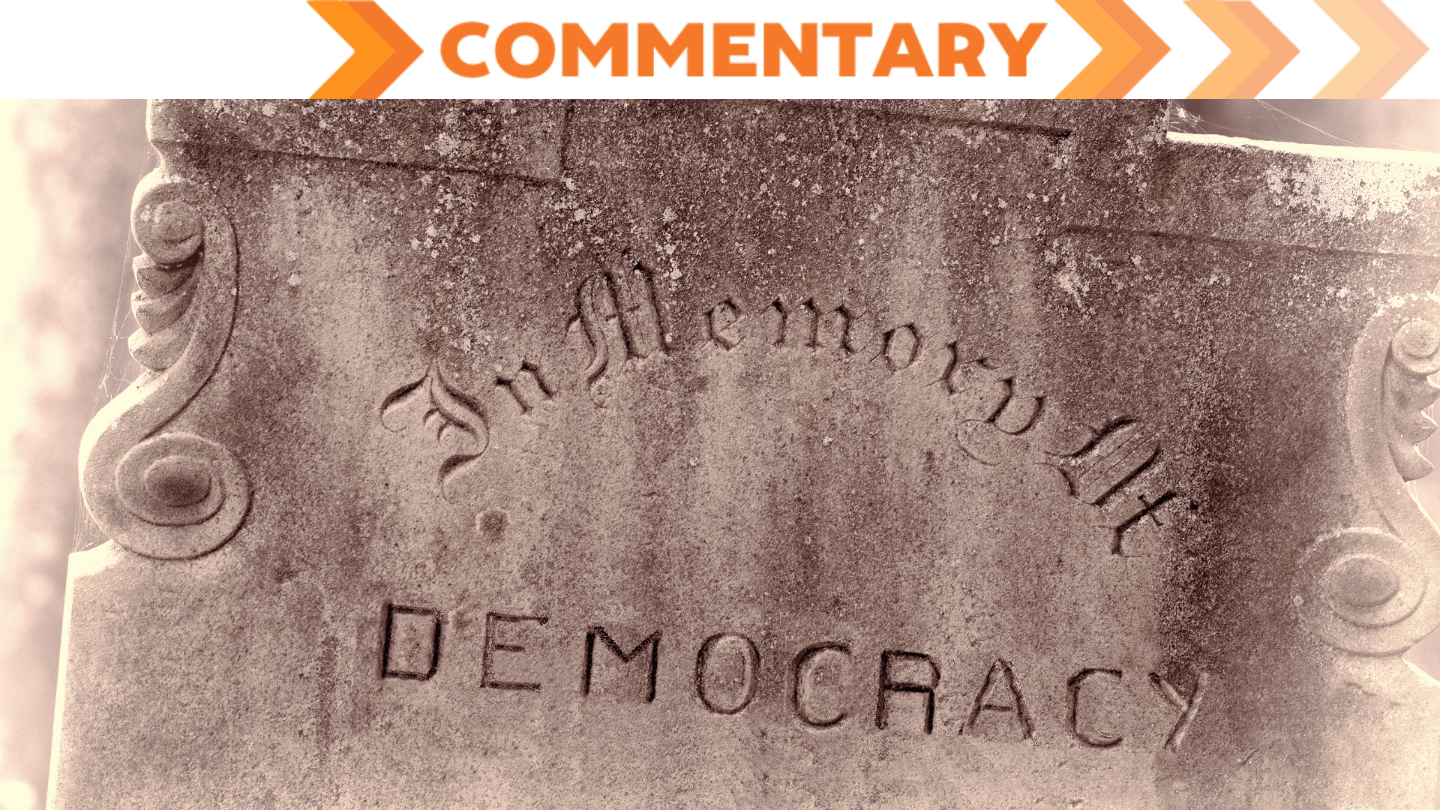 What Could We Do To Fix Our Broken System?

What is stopping us? Why can’t we give America a much-needed raise, provide all our kids a decent education, reverse climate change, make sure billionaires and big corporations pay their fair share of taxes, eliminate policies that sustain racial and gender discrimination, and finally assure simple, secure voting for everyone? Large majorities of us want all these things, so why can’t we have them?

It’s because we are ruled by the few, not the many. Majority rule — self-rule by the people — has been intentionally eliminated from our political system. Here’s how it happened (and what we could do about it):

Almost 70 years ago years ago, in 1954–55, the Supreme Court’s decisions in Brown v. Board of Education convinced many Southerners that government posed an acute danger to their racially segregated way of life. As they fought to prevent racial integration in public schools, these Southerners first attacked the idea of “government schools” and then they attacked the idea of government itself (today we call it “libertarianism”). To achieve their goal, these segregationists had to eliminate majority rule and replace it with rule by the few, nationwide. It took them several decades, but they succeeded.

In the 1970s these white supremacists were joined by (and funded by) a cadre of anti-government billionaires. Together, they hatched a plan to end majority rule. They all hated majority rule because substantial majorities in the U.S. favor an active government, a government committed to helping people solve big problems that cannot be solved by individuals. For example, in the U.S. in 2017 substantial majorities told the Pew Research Center they want active government to have a “major role” in ensuring access to health care, helping people escape poverty, ensuring safe food and medicine, maintaining the nation’s infrastructure, ensuring access to quality education, setting workplace standards, ensuring basic income for everyone over age 65, and protecting the environment. Majority rule produces active government, which can reduce inequality, unrig a rigged system, and protect the civil, political and human rights of everyone. Of course, to pay for active government, billionaires and corporations would have to pay their fair share of taxes.

As the seventies rolled into the eighties and nineties, these 1950s segregationists were slowly joined by other white supremacists, by anti-government libertarians and Tea Partiers, by global-free-market neoliberals, by bellicose neoconservatives and paleoconservatives, by anti-tax enthusiasts, by Christian theocrats, by proto-Nazis (Proud Boys, Boogaloo Bois, Oath Keepers, Oath Enforcers, Three Percenters, the Ku Klux Klan, and other authoritarians), by strong believers in male dominance and a strict patriarchal family maintained by threat and physical punishment, by in the beneficent power of large corporations, by male and female misogynists, by disciples of sundry paranoid conspiracy theories, by the gun industry and its willing dupes, by anti-union corporados, by those who condemn various sexual identities, and by millions of angry ordinary people who have been screwed by the rigged system, whose lives are now dedicated to outrage, grievance, and resentment at their loss of social status (both real and imagined).

All these disparate factions were corralled into a semi-coherent cadre funded by individual billionaires whose wealth was inherited, or created by the market dominance of large corporations, and enhanced by tax avoidance. This cadre aimed first to dismantle and discredit the era of New Deal-style liberalism (the era of active government led by Roosevelt, Truman, Eisenhower, Kennedy, Johnson, Nixon, and Carter) and, second, to make sure that a majority vote could never bring it back.

After roughly 15 years of fumbling around for the levers of power, in the late 1960s some Nixon Republicans hit upon the “Southern strategy” — to use latent racial animus to convert Southern and Southern-leaning Democrats into Republicans. These “dog whistling” opportunists slowly built a political tent big enough to encompass all of Crazytown. In short, they slowly built the modern Republican Party.

Eventually, they drove many traditional “moderate” Republicans (political descendants of Dwight Eisenhower and Nelson Rockefeller) out of the G.O.P and into the “undecided” column or even into the Democratic Party.

As part of their plan to establish “rule of the few,” these government-haters campaigned patiently for decades to establish in U.S. law a corporate “right” to free speech and then to establish that money is speech. Get it? The right of corporations to spend tons of money, in secret, to influence elections is guaranteed by the Constitution because corporations (which are pieces of paper) now have the same rights as individual humans. (James Madison is retching in his grave.)

Starting with Buckley v. Valeo in 1976, the Supreme Court eventually allowed unlimited cash donations (given in secret) to political campaigns, unleashing the political power of the billionaires. The super-rich no longer even have to spend their billions to own a politician. In a primary election, they just have to say to every candidate, “We have unlimited secret funds to work for you or against you. Will you play ball with us or not?” Game over.

Despite their distinctly minor numerical status (27 percent of U.S. adults at their peak), the inhabitants of Crazytown were organized and directed by smart, ruthless, disciplined toadies who specialized in fundraising and persuasion and who coordinated large-scale, multi-decade efforts to dismantle and discredit the main idea behind New Deal liberalism (the purpose of government is to assure well-being of the people), undermine respect for government itself, and eliminate majority rule.

Initially their plan rested on traditional Republican beliefs — small government, low taxes, and what some Republicans called “individual responsibility,” which they embraced at the same time their leaders and funders were growing rich from government largesse. They pretend to be “self made” but, as everyone knows who has thought about it, there is no such thing as a self-made man or woman. We all inherit the public goods that were financed and created by previous generations and previous governments. (See Miller & Lapham, The Self-Made Myth and Alperovitz & Daly, Unjust Deserts.)

A spate of scary monetary inflation in the 1970s provided an opportunity to discredit the economic theory underlying New Deal liberalism — known as Keynsianism — and opened the door for neoliberalism, the idea that government should just stay out of the way and let the free market work its magic on a global scale. According to neoliberal ideology, governments should create an enormous bureaucracy (the World Trade Organization) to clear the path for the unimpeded movement of capital worldwide. Many liberals fell into this trap, with disastrous consequences for democracy and for the nation.

Moving capital (and jobs) overseas soon put U.S. workers on the defensive (“You don’t like low wages? Shut up or we’ll move the company to Mexico!”), which soon diminished the power of unions (because they were rendered largely helpless), which then diminished the size of unions (why pay to join a helpless organization?), which then silenced the voice of workers. Then capital (executives and shareholders) began to take a larger share of the profits — just because they could — giving less to workers, magnifying inequality. In time, inequality grew gargantuan and, with it came gargantuan resentment.

The genius of Republican strategy was to deflect that resentment away from the billionaire corporados and aim it sideways against the poor, immigrants, and people of color, thus assuring continued rule by the few. In the Southern states, poor whites had always been suckered into believing that their true interests lay in helping the plantation masters intimidate and exploit destitute Blacks. The Republican “Southern strategy” worked that same trick again and again, this time nation-wide. Together, not-rich whites and not-rich Blacks could have mounted a formidable political engine if they had joined forces, but they didn’t. Divide and conquer — the oldest trick in the book — ruled the day, and rich whites smirked all the way to the bank as working-class whites and Blacks remained divided — and were rewarded by stagnant wages, shrinking opportunities, and growing insecurity.

Today the Republican Party remains the party of the rich, but now it’s rich authoritarians and their lackeys who call the shots. Slowly, systematically, over decades, they have rigged the rules so that ordinary people no longer have a say in public policy.

What could we do about this? To restore self-rule by the people, majority rule, we could all — I mean all of us together — could urge our U.S. Senators to focus on eliminating the filibuster, a Senate rule that the Senate can change by a simple majority vote. The filibuster is what’s stopping us from having the public policies favored by a large majority of the U.S. population.

Here’s how the filibuster rule works: when a new law is proposed, a single Senator can make one phone call or send one email saying he or she is “putting a hold” on the proposed law. That simple act (which can be accomplished in secret — the public typically never learns who did it) immediately requires that a 60-vote majority is needed to enact that proposed law (instead of the usual majority vote of 51). The filibuster rule allows any 41 senators to kill any proposed law. This is the essence of minority rule. The framers of the Constitution warned repeatedly that minority rule would not work, and they were right. Because the filibuster creates minority rule in the Senate, we can’t fix all the parts of our society that are broken. The Senate is the place where popular public policies die.

The filibuster was not written into the Constitution. It is a rule adopted by the Senate, perfected after the 1830s by Southerners protecting their right to own slaves. It has been used since then mainly to prevent the enactment of civil rights legislation. President Biden has called it a racist remnant of the Jim Crow era. A Senate that maintains the filibuster rule is a racist institution.

The most important public policy being thwarted by the filibuster (or even the threat of filibuster) is the right to vote. Because Republicans know — and even acknowledge openly — that they cannot win elections without suppressing votes, they filibuster any laws that would guarantee everyone the right to vote. And until we have “one person, one vote, no exceptions” we won’t control our own destiny. Without a guaranteed right to vote, we will continue to be ruled by the few. Everyone who cares about social justice has a stake in this. Can we get together and raise a ruckus to pressure our Senators? Whatever your issue may be, whatever your mission may be, you are being thwarted by minority rule.

Once we eliminate rule by the few, then we can eliminate the influence of private money from of our political system and perhaps even abolish the undemocratic Electoral College. But this is only possible if progressives and liberals get together and reach agreement on priorities. Can we?